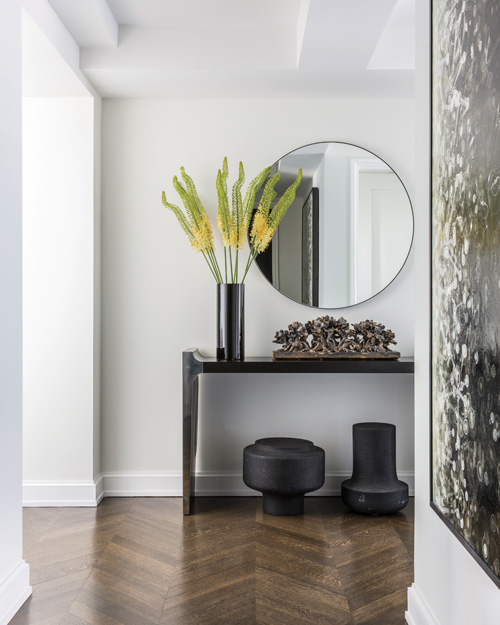 On the 9th floor of a 1940s Art Moderne building in Manhattan, interior designers Jamie Drake and Caleb Anderson, who recently formed a partnership to become the firm Drake/Anderson, were entrusted with a three-bedroom, 1,950-square-foot corner apartment with steel windows and French-style herringbone oak floors. The lofty rooms with coffered ceilings provided these designers—who have individually decorated grand projects, including lavish estates in the Hamptons and an apartment inside the tony Christian de Portzamparc–designed skyscraper One57 in New York—with a solid shell in which to shape the interior of their friend and client’s first home in the city.

A long wall of windows facing north allowed balanced daylight into all the major rooms, and perhaps this asset alone—difficult to come by in the building’s dense Greenwich Village neighborhood—was what prompted the owner, a methodical, restrained 40-year-old investment professional, to move from a small one-bedroom rental and purchase this larger, L-shaped apartment. “I was instantly attracted to the layout,” he says. “It felt spacious and roomy, but also comfortable and intimate.” All it lacked was a truly modern interior.

Drake and Anderson advised their client to jettison most of his old furnishings and start anew because they knew that, being a sharp dresser, he would take to a tailored, well-curated space he could later personalize. To achieve their collective vision, “we decided to mix some high-priced objects and less costly pieces,” says Drake, an established modernist with a penchant for vibrant color. Anderson, the younger of the two designers, has a taste for fine period furnishings. At the Kips Bay Decorator Show House last May, he and Drake worked on their first show house room together, and this apartment became the next phase of their debut as design collaborators.

“It was already a high-quality space with nice moldings, so we had to do very little from a construction point of view,” Anderson says. In a prewar building, adds Drake, one can count on “well-made, solid details.” Moving out of their comfort zones to an eclectic mix of furniture and custom built-ins could have become a hurdle, but it was a challenge they welcomed. “Our client wanted us to use a lot of white and gray,” Anderson says. “That was easy, because nowadays we prefer less color anyway—although this is an extreme example.”

“One of the things I liked about the apartment is its open expanses for displaying art,” the owner says. Not a collector per se, he assiduously took the designers’ advice on what to look for. Newly acquired abstract paintings and drawings were deftly combined with the owner’s collection of what he calls “legacy objects,” namely family mementos, as well as novels and books on design, art and cooking.

The result is a modern, almost Spartan design—a kind of white and black allegory of the owner’s routine at the beginning and end of each day. Now, once he steps inside the front door, an oil-and-acrylic canvas painted by Brooklyn artist David Mann that Anderson says “has a wonderful feeling of being in outer space in the night sky,” greets him every day. Off the foyer, in the entrance gallery—one of the less well-lit areas of the apartment—a light-reflecting mirror from Room & Board hangs above a console by Niedermaier, under which lava-stone stools by Stéphane Parmentier add a sculptural note. 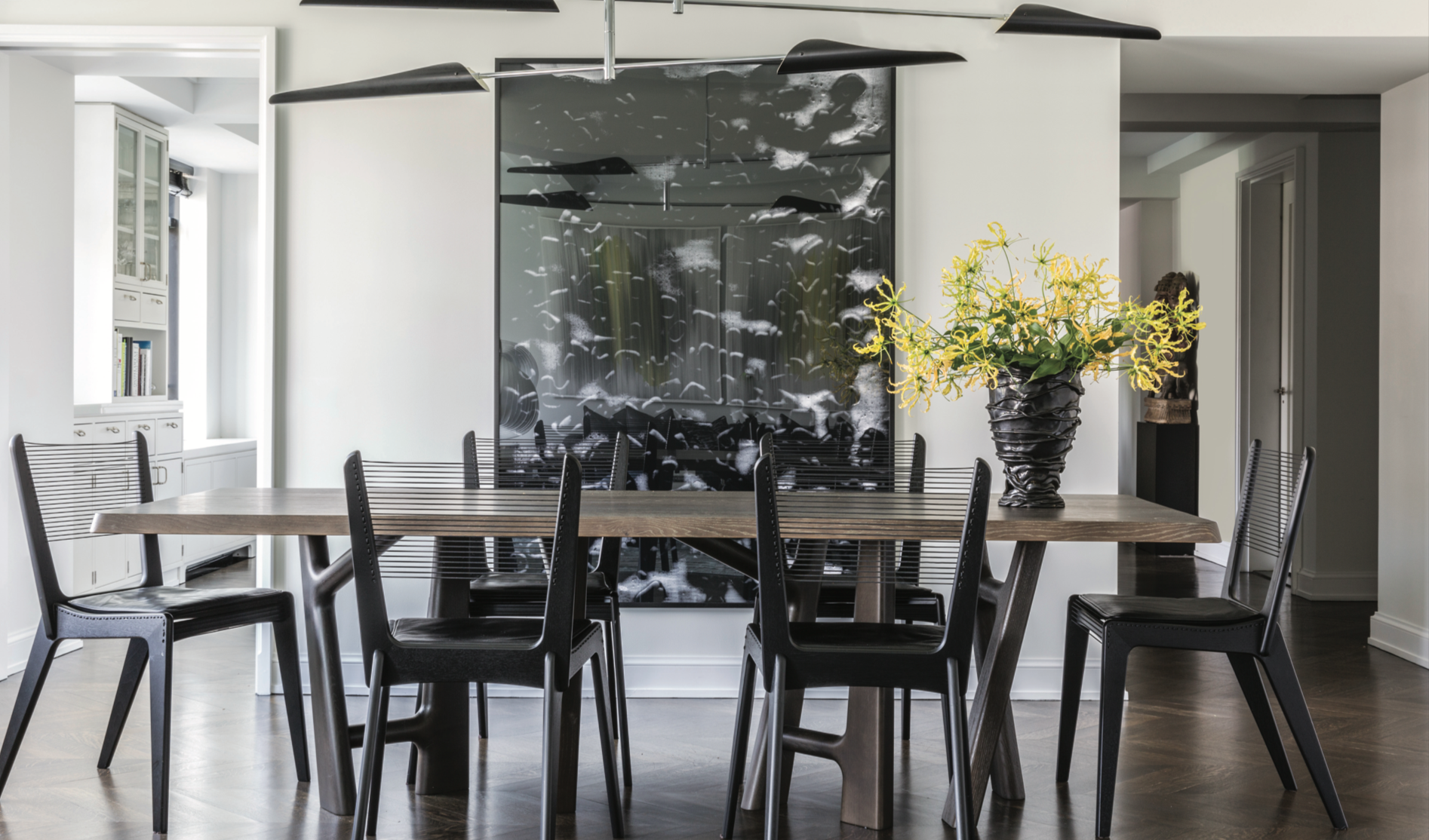 In the open-plan living and dining space, subtle furnishings such as a Mattaliano sofa from Holly Hunt covered in dark fabrics from Donghia and Knoll floating 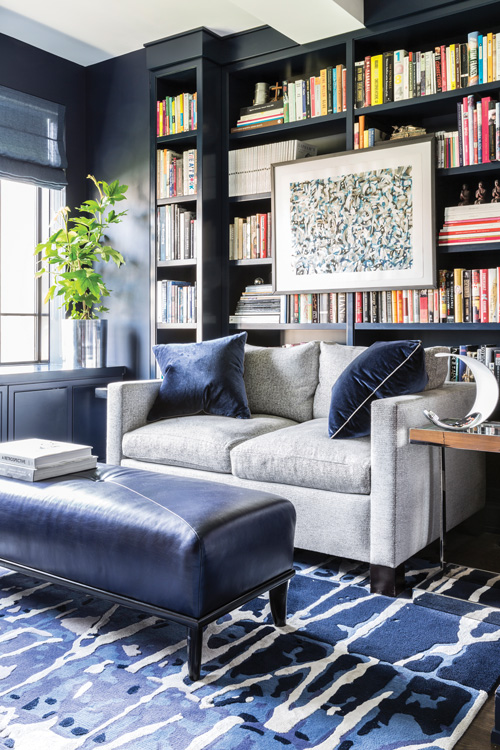 atop a pale-gray hide rug by Kyle Bunting are tempered by sunny yellows in a graphite and colored pencil diptych by Anne Lindberg. The eclecticism of shapes and styles of the leather Tre Pezzi chair from Cassina, mirror-polished stainless steel Inox Sigmund chairs, Lucite armchairs from Venfield and, flanking the sofa, a 1960s Hansen marble table lamp and a sculptural one by Mathieu Lustrerie, promote a lively visual discourse. Even the materials “speak” to each other. “We do like contrasting textures,” Drake says. “Hide rug meets vintage acrylic seats meets glass coffee table. If you look closely, the sofa also has several different textures.”

Above an Ybu dining table with a tree trunk–style base designed by Christophe Delcourt, is a Sarus Mobile chandelier by David Weeks. It hovers above the 1950s Jacques Guillon cord dining chairs from Avenue Road and a black vase by Gaetano Pesce. On the wall, between the dining area and the kitchen, a large digital print of a composition of random letters of the alphabet by Matt Keegan is an absorbing graphic.

Just off the gallery, the library—formerly a spare bedroom between the kitchen and the master bedroom—with custom bookshelves, walls and millwork painted a deep navy blue, is the only significant room in the apartment that was made deliberately moody and dark, poised to double as a theater when the window shades are pulled down. “It is my retreat,” the owner says. The shelves, accented with a framed print the owner found at auction years ago, are filled with his favorite books that also add a flash of color, echoed in a blue silk and wool Edward Fields rug made by The Alpha Workshops, a 21-year-old school and atelier for HIV-positive artisans in New York’s Chelsea neighborhood, and one of Drake’s go-to sources. A matching custom ottoman by The Bright Group covered in blue Edelman Leather is paired with a sleeper sofa from A. Rudin, side tables by Mitchell Gold and Bob Williams, and a Luceplan Curl table lamp.

Perhaps the airiest section in the apartment is the master suite in the northeast corner with windows on two sides. In this light-filled white space, the designers added another custom Edward Fields rug with ombre patterns. Kinetic Tizio lamps from Artemide, and Antonio Citterio’s Guscio Alto chair from Flexform flank the bed from B&B Italia. A brightly colored photogram triptych by Ellen Carey hangs on the wall. Here, each piece represents a step in a thoughtful process. “Our client was not driven to finish everything all at once,” Drake says. “After all, this is the realization of a long-term dream.” Drake/Anderson, 212 754 3099, drakeanderson.com 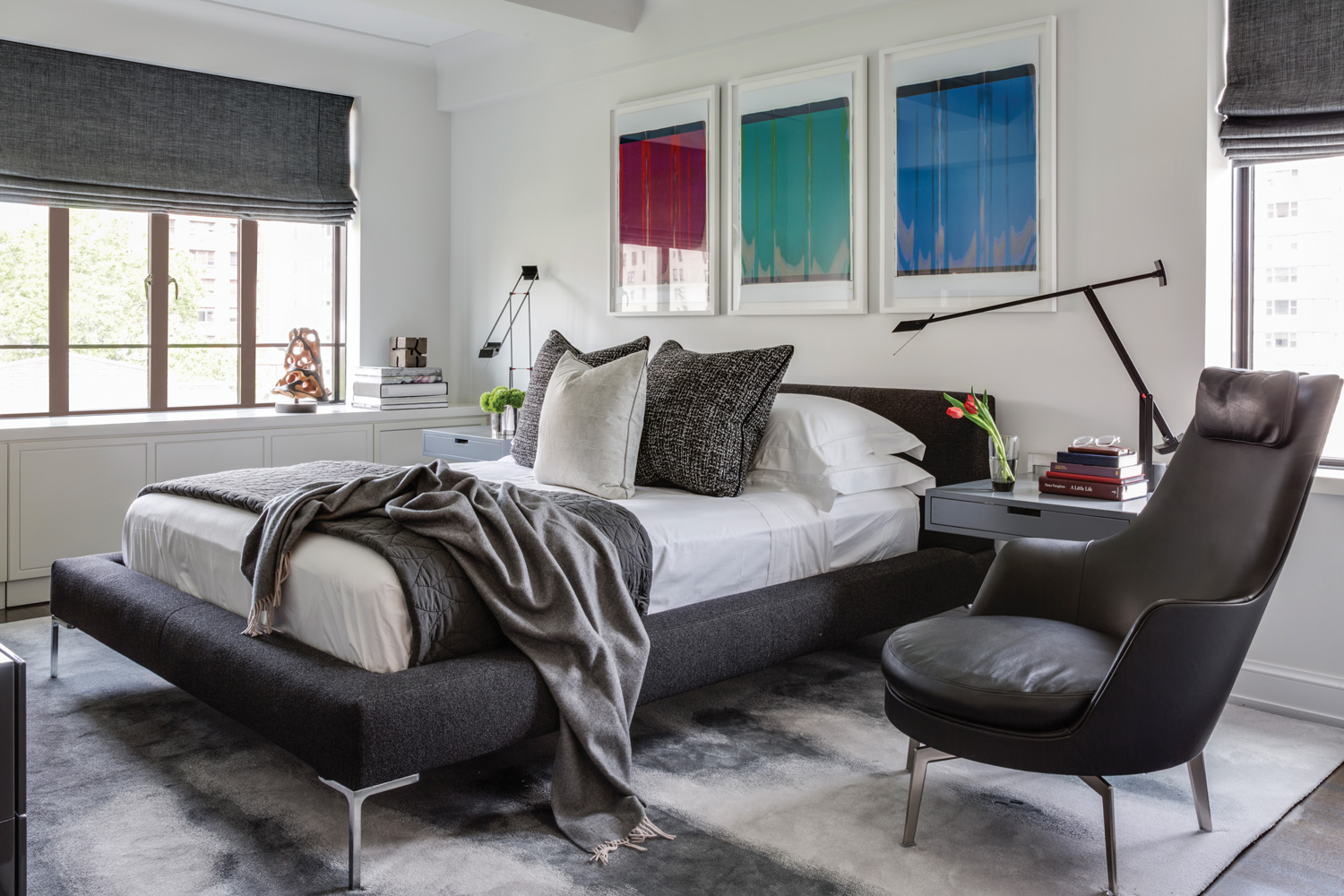