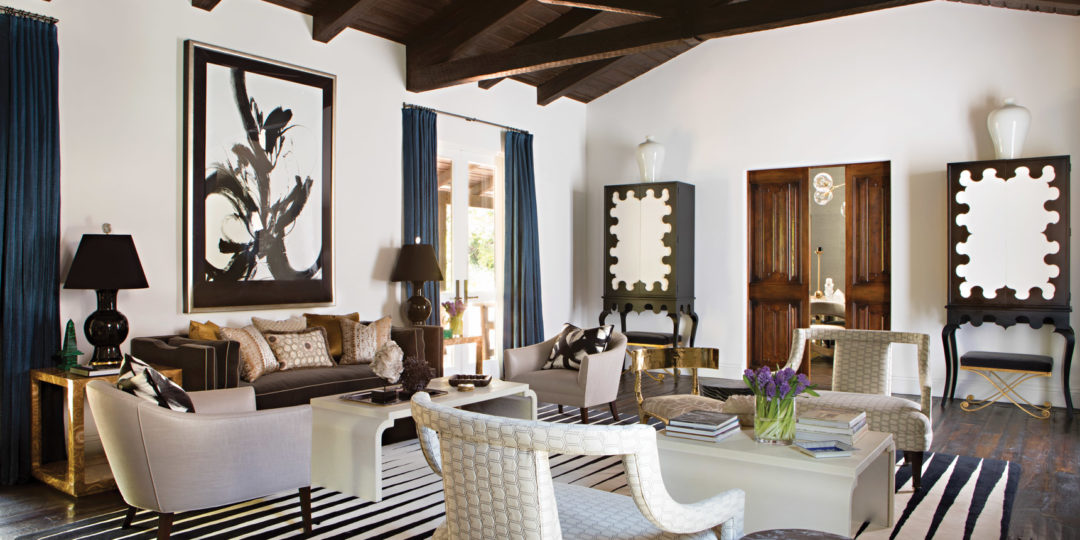 If These Walls Could Talk

A portrait of the Mexican actress Linda Christian painted by Diego Rivera once hung against the pale-pink walls of the Spanish-style house in Bel-Air the subject shared with her husband, the Hollywood swashbuckler Tyrone Power. A 1952 article from Modern Screen magazine described the place as such: “Painted a tropical pink, which contrasts with its black wrought-iron accents, it looks almost like a jungle flower half hidden among the lush growth of trees that cover this particular section of Bel-Air.” After their divorce, then Power’s sudden death in 1958, the tropical pink soon faded and the Rivera painting was taken down, and the house came to be occupied by a string of actors, including Elizabeth Taylor, Paul Newman and Joanne Woodward, Henry Fonda and Diane Keaton. The surrounding neighborhood established a legacy of California cool, causing Mick Jagger to pine for a nearby enclave in the song “Winter,” recorded in 1972: “I wish I’d been out in Stone Canyon/When the lights on all the Christmas trees went out.”

The Rivera painting established the path for the current art-filled incarnation of the home, which a couple with two college-age kids recently restored and renovated with the help of Los Angeles designer Cari Berg. The designer began in the living room—near where the Rivera once hung—which had become a wash of gold walls and matching ceiling beams. “Everything felt very muddy,” says Berg. “It never really popped in terms of contrast.” Berg was able to intuit the couple’s needs, having completed the design of their previous home. “Their old house felt a bit dark and enclosed,” she says. “This one had more potential to be more open, lighter and brighter.” Berg upped the contrast, lightening the walls and darkening the beams, and placed elegant furnishings—her own custom designs with pieces by Kelly Wearstler and 1stdibs finds—that can migrate around the room as the social scene dictates. Here, she introduced her expertise on balance and scale, with a pair of “chair and a half” size loungers next to slender upholstered chairs near a single, sublime hammered-gold side chair. “You really notice when the scale is off in a room,” says Berg, whose natural high-low gestures set the rhythm for the rest of the house. Centering the home is a new glass-enclosed gallery that Fabio Rigo de Righi of Domani Architecture helped integrate as a buffer between the interior courtyard and the house. A promenade through the gallery reveals a museum-quality gathering of works by Roy Lichtenstein, Ed Ruscha, John Baldessari, Ruben Toledo, David Hockney and others. Russell Young’s shimmery Pop Art manipulation of a 1954 photograph of Marilyn Monroe crying moves around the space as the homeowner sees fit. “She just started seriously collecting when we began the project,” Berg says. “It was her full time job for more than two years while we were doing the house.” The homeowner was not just engaged when it came to the art; she provided Berg inspiration and freedom from every angle. “She was so open,” says Berg. “When a space was looking too pristine, I would say, ‘We need to mess it up—it needs to get funked up with some vintage or something.’ And she would understand. It was a great project and so fun to do.”

In addition to the contemporary artworks, the owner took a deep dive into black and white photography, collecting photos from Julius Shulman to Harry Benson to Ruth Orkin. Several hang in the dining room, their light and shadows reflected in the abstracted flamestitch Donghia drapery fabric resembling the needle markings of an active Richter scale. The gallery’s charcoal and white stone checkered floor and the gray of the master bath’s Greek key mosaic floor from Ann Sacks seem to carry a similar noir scheme. “We went to galleries together and I learned a lot about photography,” says Berg. “I am so much better versed in it all now.” The art continues throughout the house, and it’s well edited. There’s a Calder in the family room, and a Mr. Brainwash and a Jeff Koons puppy in a bedroom. “Artwork makes a room,” says Berg. “It changes the vibe and takes it from good to great.”

Outside, the house benefits from a verdant screen of mature trees—some of which are old enough to have shaded Power and Christian—combined with new, abundant plantings in the backyard. The original pool and poolhouse still hold court here, the latter covered in slowly creeping vine tendrils. Faithfully retained and restored, they are another reminder of the house’s glamorous history. In fact, Power’s signature remains immortalized on the Los Angeles Department of Building and Safety permits for the exterior improvements. Notes the homeowner, who echoes a common sentiment among those who own storied houses once inhabited by colorful characters: “If those walls of the poolhouse could talk.” Cari Berg Interior Design, cariberginteriordesign.com