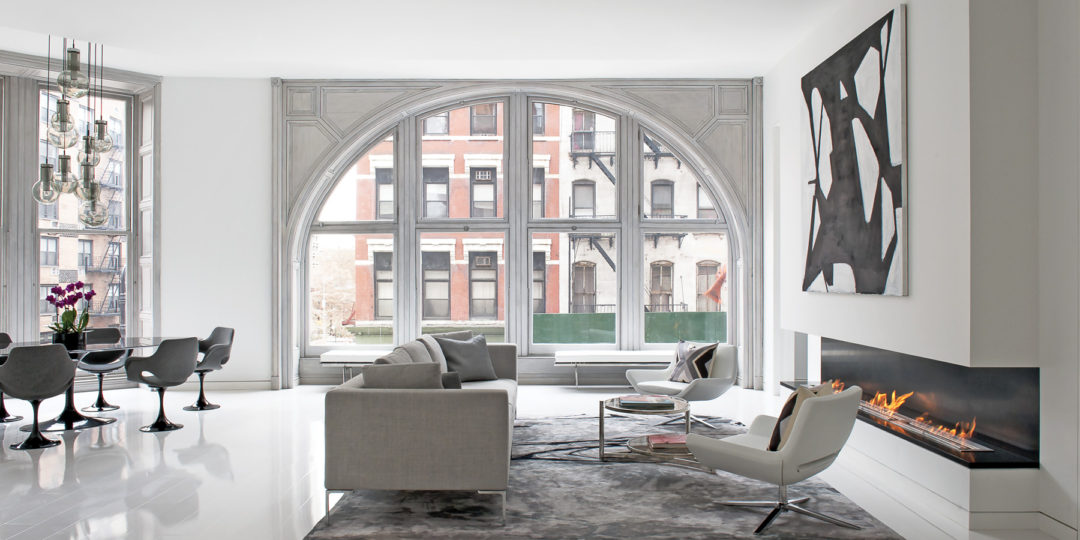 A Modern Apartment Renovation in Manhattan Over the course of one very productive weekend  in October 1878, a man named George Leslie pulled off what many historians still believe is one of the most impressive and audacious bank heists of all time. The  location was the Manhattan Savings Institution, situated on the busy corner of Broadway and Bleecker Street in lower Manhattan. When employees arrived on Monday morning and opened the bank’s putatively impregnable vault, they quickly discovered that Leslie had beaten them to it—and had made off with nearly $3 million in cash and securities, an amount equivalent to about $65 million in today’s dollars.

In relaying the tale, Marcella Cacci, who now lives 20 feet directly above the spot where George Leslie achieved criminal immortality 138 years ago, notes with appreciation that New York’s greatest bank robber was an architect by training. In fact, according to most histories, the socially well-connected Leslie (who was also responsible for many other heists, and whose illicit exploits weren’t discovered until after his death) used his architectural credentials to persuade bank executives to show him the plans and blueprints that would later prove invaluable to carrying out his capers.

The story of the Leslie heist is exactly the kind of historical footnote that made Marcella Cacci fall deeply and instantly in love with the 3,000-square-foot corner apartment on the second floor of the former Manhattan Savings Institution building, which was redesigned and rebuilt by Stephen Decatur Hatch in 1891. In 2013, fresh from buying and overhauling a West Village duplex, Cacci, who works in the fashion industry, surprised herself and her friends by actively seeking out a new, and much more ambitious, project. “I knew I wanted a loft, and I felt like I was ready to do a full renovation,” she says. “When I saw this place, my jaw dropped to the floor. As soon as I walked in, I knew this was the one. I could instantly see how I would configure it, how it would look.”

As Cacci will be the first to admit, not everyone could see what she saw that day. The loft’s previous owners were artists who had occupied it for the last 40 years, but whose creative streak had apparently stopped short of renovating their own living space. “It was very dark, for one thing, and it was in quite a bit of disrepair. And there were no systems: no HVAC, for example—just a little air-conditioning unit in one of the windows. They had also nailed a number of their artworks into the window frames, so there were these big holes in them.”

About those windows: If you’ve ever found yourself walking along Broadway in Manhattan’s NoHo neighborhood, you’ve likely seen them before. From street level, one’s eye is ineluctably drawn up to the arched wonders, which stand 13 feet tall at their highest point and stretch 20 feet wide. It’s no exaggeration to say that when night is falling and they are illuminated from within, their effect is breathtaking enough to make the ghost of Louis Sullivan—who designed the landmark Bayard-Condict building next door, his only building in New York—a wee bit jealous.

Once the purchase was final, th e builders and artisans that Cacci hired—five for the windows alone, and another half-dozen for the rest of the space—clearly had their work cut out for them. (She also enlisted architect David Howell for the interior plan, and builder Andrew Ferguson.) The yearlong renovation was organized around a single, inviolable principle: modernize whenever possible, but defer to the grandeur of those windows always. As a practical matter, however, this raised a number of problems. Chief among them was that their height disallowed the dropping of the apartment’s 13-foot ceilings to accommodate the installation of HVAC, lighting, sprinkler and sound systems. To do so would have meant interrupting each window arch at its apex: an inconceivable aesthetic crime that even George Leslie, a criminal mastermind, would never have countenanced.

The solution: a gracefully floating ceiling that’s big enough to contain within in its hidden recesses all that it needs to contain—but that stops well short of the windows, and poses no threat whatsoever to their majesty. “It’s a practical feature that ended up being a design feature,” says Cacci. “Especially at night, when the lights are on and the light from the fireplace is dancing along its surface, it takes on this amazing sculptural quality.”

Throughout the renovation, Cacci was mindful of the need to punctuate all of this coolness and airiness with moments of warmth and solidity. In the kitchen, it meant anchoring the ethereal gloss of the custom Poliform cabinetry, Gaggenau appliances and Italian  barstools with an island of indisputably earthy marble. A few feet away, a 1960s Danish pendant chandelier, from Rack, and a Saarinen oval dining table confidently remind us that modernism, as paradoxical as it may sound, is firmly rooted in history.

No furnishing or idea stands alone; everything is ultimately revealed to be in dialogue with something else. In the living room’s main seating area, the dimensions and proportions of the fireplace’s black marble backdrop identify it as the natural partner of the sleek, Antonio Citterio–designed sofa, from B&B Italia, sitting across from it. In the master suite, the headboard and a set of cubes are covered in a particular shade of Holly Hunt fabric that ties them, subtly but surely, to the stain on the curved wood of the window frames.

In the end, Cacci’s instincts were spot-on, evidence of which came in the form of a coveted award from the New York chapter of the American Institute of Architects, received in 2015. Renovating this spectacular space, she says, “was my job every day for a year. I know a lot of people have renovation nightmares, but I loved it.”