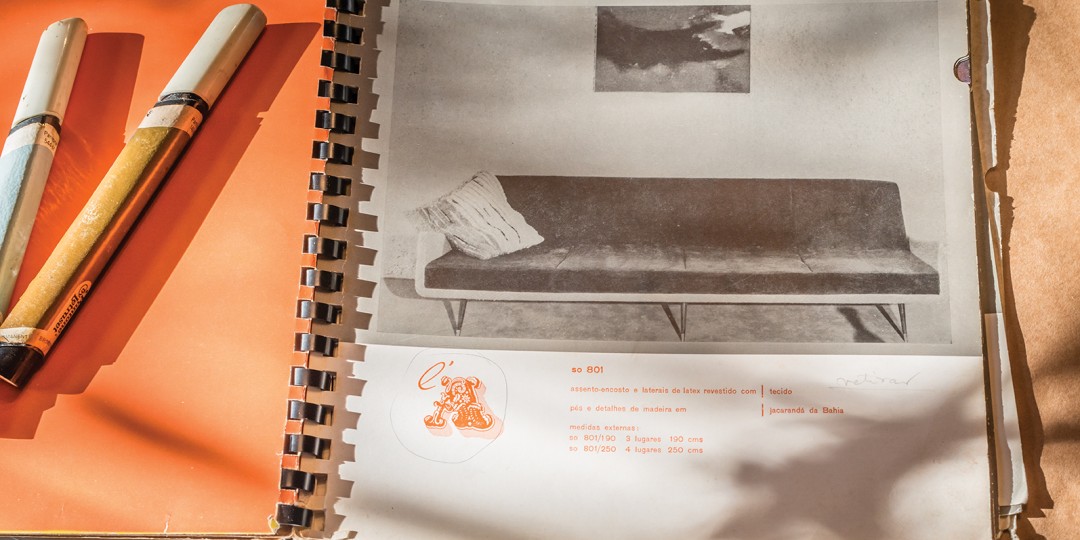 Text and photography by Audrey Hall For Polish-born architect and furniture designer Jorge Zalszupin, who emigrated to Brazil after World War II, the fundamental inspiration for his work is the human anatomy. He tells me this from his home in São Paulo, seated in his iconic chair, the Dinamarquesa. Designed in 1959, the same year he founded his studio L’Atelier, the chair is a classic mix of wood and fabric, curved to the body and lacquered to a supple touch. It was his first piece and continues to be his favorite.

Fundamentally, his designs take root in sensuality. “I like to be able to place my hands and caress the wood furniture,” he says. “It has to be warm.” He cares about how his work holds the body, how it curves and touches the skin. For Zalszupin, the form, the feel and the material are critical choices. “It’s essential that the form is a good fit anatomically and human-scaled—not too big and not too small. A person has to feel good when seated.” The conversation drifts in and out of French, English and Portuguese, with his daughter Veronica supplying the lingual glue when necessary. “The materials need to be noble,” she says. “He prefers primary elements that are smooth, soft and rounded.”

Zalszupin’s furniture is noted for graceful lines, a strong use of local woods and a combination of impeccable craftsmanship and classical detailing. His goal has always been to make his work special, feel good and last forever. Wood is the essential skeleton of the work, his treasured species being jacaranda, a hardwood native to Brazil that adopts a glassy, smooth finish, and pinho-de-riga, a rare Eastern European wood that was shipped to Brazil in the 18th and 19th centuries. He uses both in the Dinamarquesa as an elegant detail in the arm. “His desire to experiment with different materials and his personal sensibility and warmth translate to his work, making beautiful, functional pieces of art,” says Selma Cisic, president of Adesso Imports in Los Angeles. “He took the raw elements available in Brazil and made them his own.”

At 93, Zalszupin is soft spoken and modest about his long, successful and influential career. He started L’Atelier as a small workshop that brought together a team of highly skilled craftsmen and professionals doing everything from researching materials to finalizing the product. Zalszupin was an early pioneer of shaped plywood and chromed metal, and had an important role in the introduction of injection-molded plastic furniture to the Brazilian market. He grew to be considered one of Brazil’s most important designers of the 20th century. in premier galleries in Brazil, Europe and the United States. Purity of form and sensuality of the materials are elements combined that make his design timeless, and his work is as relevant today as it was years ago. “Jorge Zalszupin is an icon whose influence on contemporary Brazilian design is unprecedented and far reaching,” notes Carlos Junqueira, the owner and curator of Espasso, based in New York and Los Angeles. “His designs are timeless and classic.”

Our conversation continues with coffee and cakes in an upper loft of the house he designed and built in 1960, a modern home resting between two spacious gardens and languishing under massive rubber trees. It is an oasis in the sprawling, concrete mass of São Paulo. I ask him about his process. He talks about dreaming and having ideas come to him in his sleep, and then drawing. Says Veronica, “Drawing for Jorge is like breathing for the rest of us.”

He shares the story of running from the Nazis and how he hoped to go to the United States but wasn’t able to secure a visa, eventually moving to Brazil, a country whose immigration policy was much more open. Had he gone to the United States, Veronica points out, the Jorge Zalszupin of today could have been very different without the influence of Brazil and its many forms.