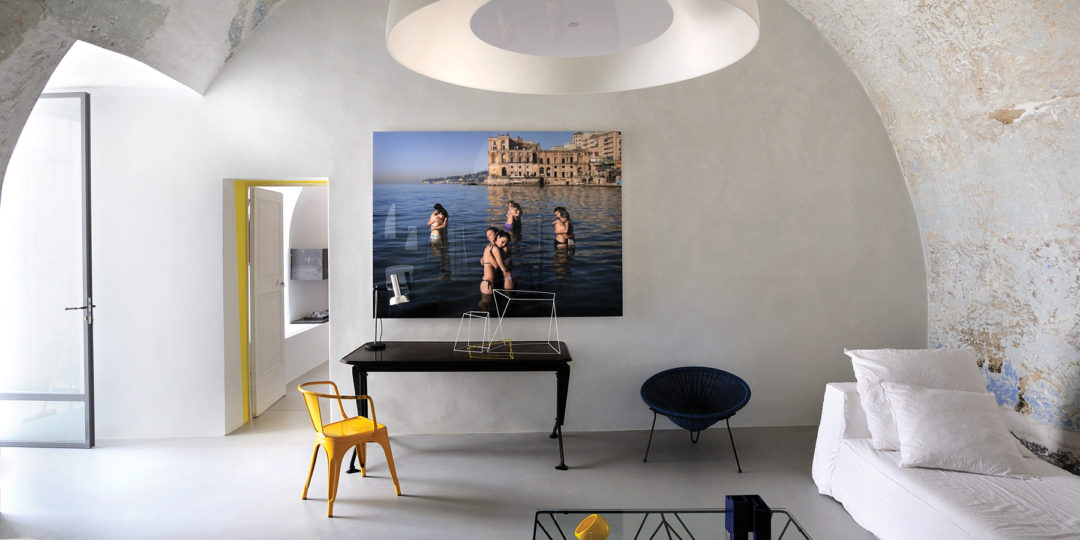 Artists and writers have always been romanced by Capri’s beauty, and Neapolitan architect Giuliano Andrea dell’Uva is no different. Reviving the island’s authenticity and rediscovering its magical characteristics were among his creative goals when he began building a home for clients on this legendary Italian retreat. A particular abode that the French would call a maison de charme, the house was designed over the remains of an ancient structure in Anacapri, a colorful village situated at the foot of Monte Solaro, with breathtaking views of the Gulf of Naples. Dell’Uva, a co-principal of Zeta Studio, composed and stylishly reimagined a series of connected spaces that were once part of the convent annex of San Michele’s church.

“I left the original colors, a cornucopia of green and blue, where I found them: buried under several layers of paint,” says Dell’Uva. He also chose a strong yellow inspired by the lemon trees in the courtyard as the fresh leitmotiv, an adroit way to contrast the gilded style of the past with modern decoration. A small passage dug through the thick walls leads to the living room, where Dell’Uva arranged a white linen sofa and a 1970s coffee table by Paolo Piva with a yellow sculpture by Gaetano Pesce. A seascape with bathers by Neapolitan photographer Luciano Romano hangs over a desk designed in 1958 for Olivetti, Italy’s computing behemoth. A small bedroom opens out onto the garden and has a dramatic valuted roof; it features a bold bedspread by Livio de Simone, the famed fashion designer and charming playboy of Capri’s 1960s dolce vita. De Simone’s colored fabrics also decorate an entire wall in the bathroom annex. Taking advantage of the thickness of the ancient walls, Dell’Uva created a tub made out of concrete—perfect in the summer for cooling off after a long day on the beach.