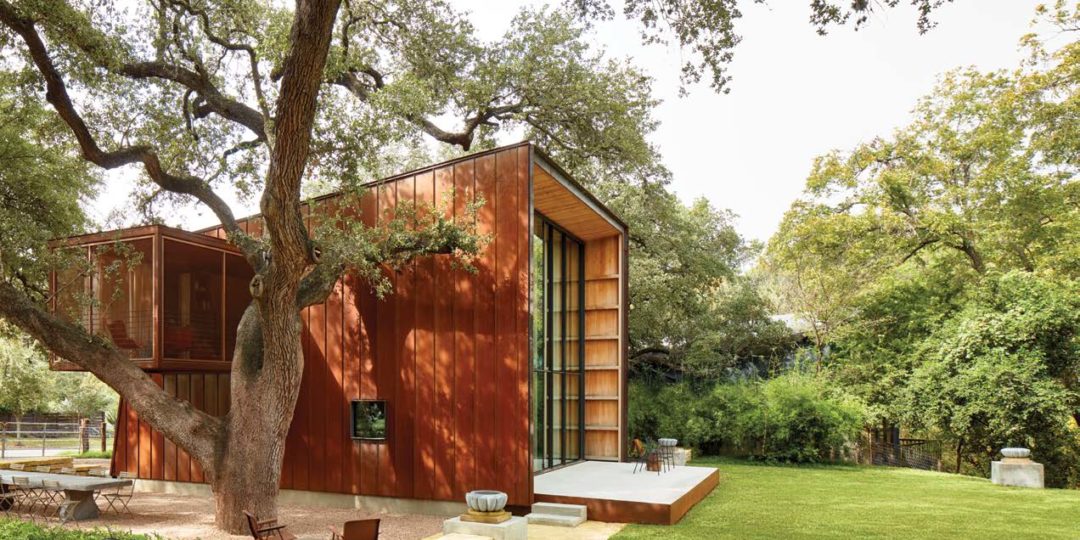 The twisting, powerful oaks drew the client to the site in Austin on which she would build a guest pavilion at home among the trees. Her design team, Joshua Rose and Rafael Kalichstein of FORM Design Studio in Los Angeles, had worked with her on other projects in other cities, so they already possessed a creative rhythm that would help inform the design of the building. As the plan was taking shape, the design team took off for a magical buying trip to Belgium and Italy that found them in the most remote secret spots off the beaten design path that would unearth sublime finds for the space.

For the shell, the team collaborated with Mell Lawrence, whose Austin firm’s work has received many AIA awards. “The structure of the oak branches moving outward provided this great canopy,” Lawrence says. “We ended up siting the pavilion the one place we could between them, and it was the perfect place for the program.” One exterior wall kicks out like the side of a pyramid, bringing to mind the sloping roofs of 1970s wood houses in the great California experimental architectural communities like Gualala and Sea Ranch. But this house is in Cor-Ten steel, which further contemporizes and sets it apart from the surrounding trees. On the opposite side, a glass wall rises to over 20 feet and is surrounded by what the team calls the “bonnet,” with an extended platform below that helps anchor the building and can double as a stage for private concerts and performances. Yet another side holds a sleeping porch—a box punched out of the steel that cradles the occupants like a nest. The last side serves as an entrance,
which unfolds as a series of volumes including one of the home’s main gestures: the steel stair one passes beneath to reach the living area.

Here, the tone is set by those unburied European treasures, found at odd hours in tiny shops on cobblestone streets lit by gas lamps. Near the sofa, the designers’ own custom riff on an antique silhouette, is a striking, hammered-brass lamp in the shape of a snail. Its base came from Florence and the shade was custom made in Rome, which also yielded the 1980s Murano Sommerso vase by Romano Donà. Sommerso, which translates to “submerged,” is defined by its series of different colors of glass that dip into the other. It catches the light from the glass entrance wall like nothing else. “We found this piece at a tiny little place in Rome,” Kalichstein says. “It was covered in a half inch layer of dust. It weighs 45 pounds. We wrapped it in our clothes, put it in our carryon and lugged it all over Italy.” Says Rose, “Everything had to be special.”

With such a grand, lofty space, it is impossible to hide excess, so there is none, and every selection holds its own, bringing with it an energy of timeless European design. The Overgaard & Dyrman dining chairs, for example, are a surprising antidote to the expected midcentury greats, but still evoke that feeling. Their green leather gives a nod to the hue of the open kitchen’s Michel Ferrand cabinetry, whose finish took several iterations to realize. The 100-year-old French hexagonal concrete floor tiles were “part of the narrative from the very beginning,” says Rose. When the pair found them in Milan, they selected different shades of gray and “bought all the last black and red they had.” (To achieve the perfect random pattern, the builder, Wilmington Gordon, laid out the entire floor in front of the house first.) Overhead, converted Milanese street lamps serve as pendants, their peeling green left unabashedly alone to reveal what’s underneath. Even the kitchen’s copper pots have unexpected origins. “We were walking around in Montepulciano, and we heard hammering coming from this tiny shop,” Kalichstein says. “We wandered in and found this little 80-year-old man hammering pots.” The same artisan also made all the utensils and even the hooks from which the pots hang.

This purposefully rough underbelly combined with a refined tension befits a house meant for real life. With a fabric from Zinc whose pattern reminds Kalichstein of a Jackson Pollock painting, the sofa invites visitors to convene and enjoy. After all, he says, the pavilion is meant to be “a coming together place not just for family, but friends.” And the de Gournay silk velvet on the Louis XVI–style chairs nearby is as naked and vulnerable as it gets. “We told the clients, ‘You’re going to be afraid of it—it’s gonna terrify you because it’s so beautiful,’” says Kalichstein, who was aided in the project by FORM’s associate designer Ophélie Renaudin. “They have bulldogs, there are children around and there are parties. We’re not stain protecting it—the chairs feel perfect to us. We said, ‘Spill stuff on them. We want it to feel as if you found them in a Parisian flea market.’ All the materials are designed to be lived in.” The James DeMartis steel coffee table itself is a sculptural object, and, Kalichstein says, “brings some of the architectural elements into the furnishings.” It relates to the blackened waxed steel stair nearby, which gives a hint of what’s to come.

Just up the steel stair, in the calming master bedroom loft open to the main space below, the spectacular vibrations of the antique, vintage European pieces give way to a more meditative study of the architectural elements. The architect devised a bed on a track that slides from its interior home—between two book recesses with night tables that slide in and out of the wall—all the way out to the sleeping porch, whose screens and sheer curtains offer just enough protection from the elements on summer nights. When the bed, with its simple, custom nubuck headboard, is at its alfresco post, chic wood cabinet doors behind its indoor position open to reveal a small sitting area and reading light for maximum cocooning. Unfinished white oak sheathes the whole interior to keep it from being too cold spatially. “The warmth of the wood allows the pavilion to be structurally expressive like the trees,” Lawrence says. “It’s difficult to create that kind of feel in an urban context, so we split the difference between sophisticated and more relaxed.” Adds Rose, “It’s all wood, so you get that glow.” That illuminative nature continues to the exterior—at night, the box resembles an occupied tree trunk, a little lantern bordered by elegant, low-profile landscaping designed and incorporated by James David of David / Peese Design and Jackson Broussard of Sprout. And although the house possesses a certain European élan, it’s at home in the Hill Country. Says Rose, “It still has that attitude—it belongs in Texas.” FORM Design Studio, form-designstudio.com; Mell Lawrence, melllawrencearchitects.com 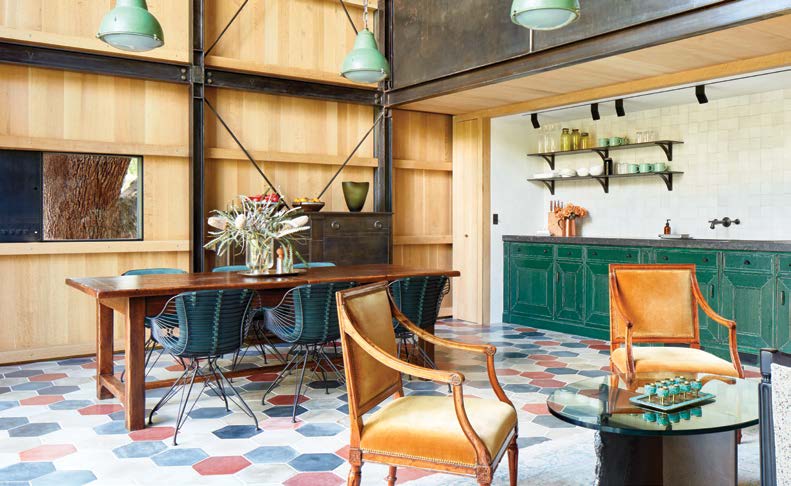 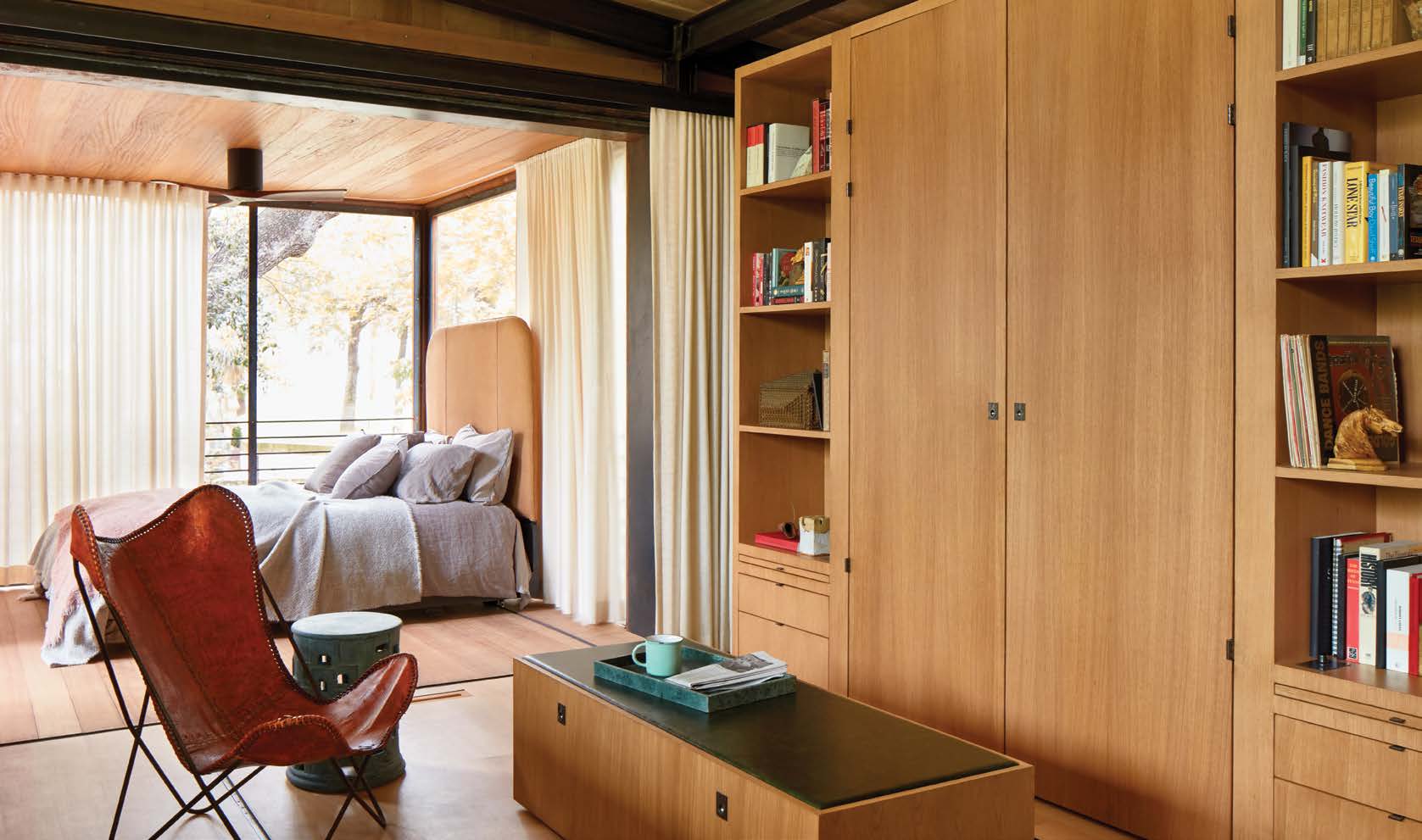