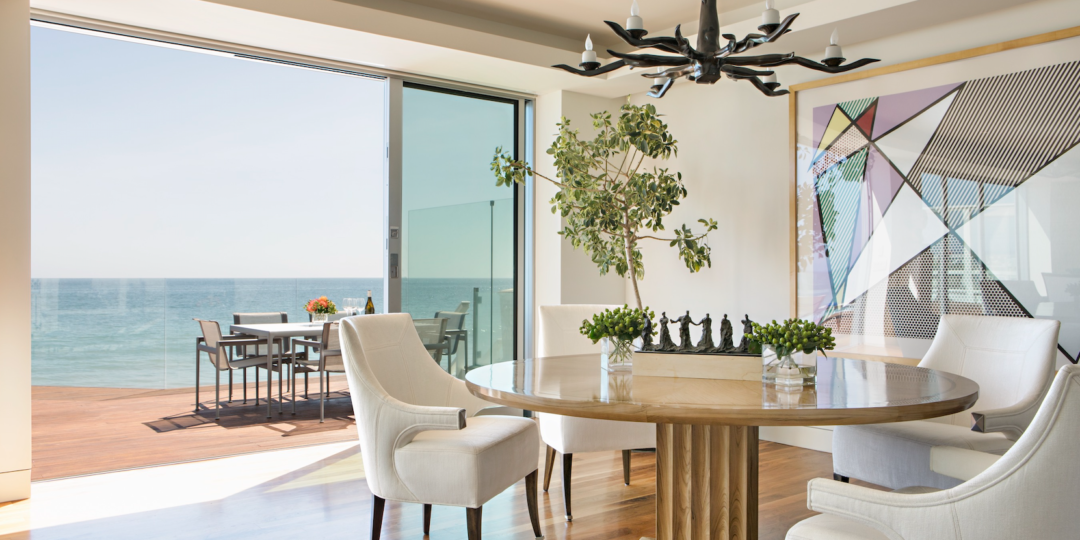 A Top Designer Creates a Modern Beach Bungalow in Malibu 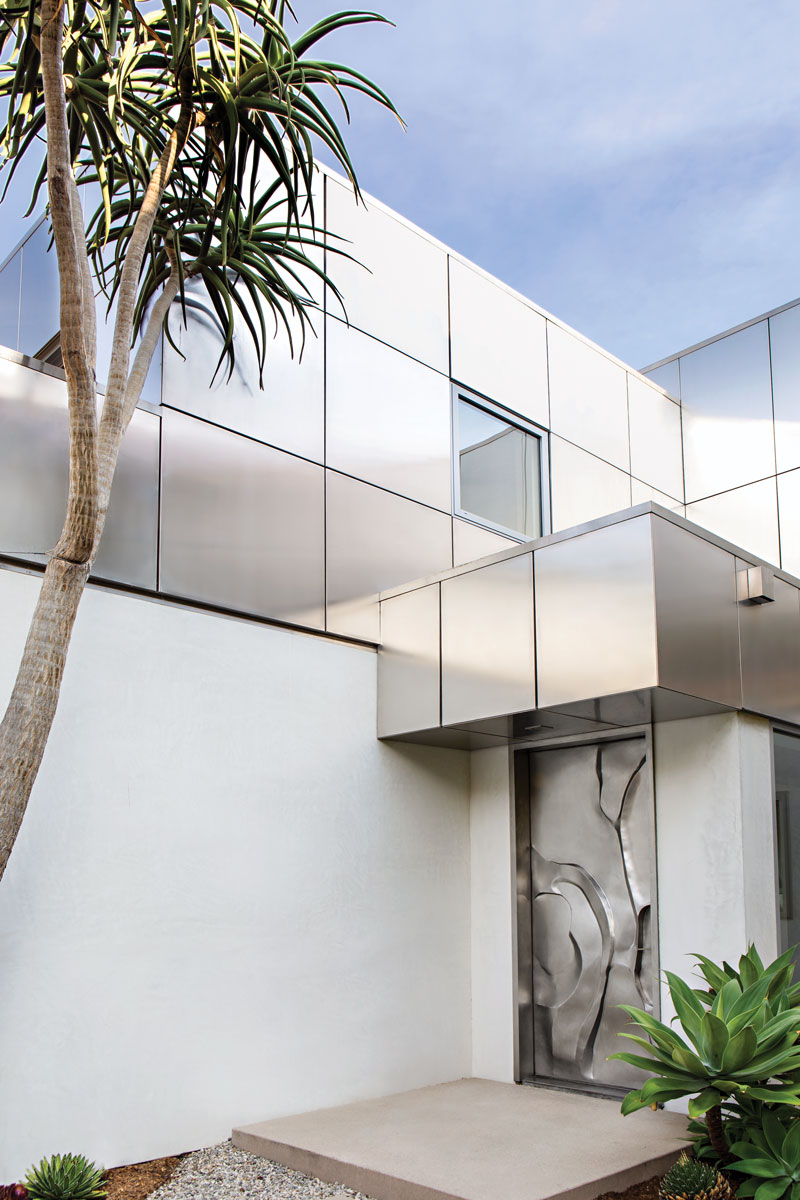 As the quaint postwar bungalows that hug the shore along Pacific Coast Highway in Malibu age and crumble from exposure to the salty ocean air, they are replaced with new builds by some of the city’s most prominent architectural firms—some better befitting the area’s natural beauty than others. In the case of a one-story beach shack on the sand purchased by a successful entrepreneur and her husband 25 years ago, “It had seen better days,” says Mark Weaver, principal of his eponymous Los Angeles firm. “It needed to be completely refurbished and it was time to do something.”

“This was an opportunity to create a great entertaining space,” says Darrell Wilson, the firm’s principal designer, whose architectural and art background helped elevate the project. An artistic angle begins at the entrance facade, where stainless steel panels by the Los Angeles architectural firm Marmol Radziner introduce a futuristic edge to the architecture by Tomas Osinski. The team wanted to complement the panels with something unique, so they called upon local artist John Krawczyk to fabricate a front door that would set an artful mood. After visiting the house for inspiration, Krawczyk designed a door, also of stainless steel, that acts as a sculptural entrée into what has become an art house primed for beachside gatherings. Those metal panels are not just a point of conversation—they add an additional layer of protection against the elements. For the residents, who began as clients and became close friends, Weaver wanted this house to be at the highest level of personalization and sophistication. “When it came time to do this, it was important to do something really special for them,” he says.

Just inside that door is a hallway and kitchen leading to an open living-dining room whose floor-to-ceiling glass sliding doors reveal the stunning view of the ocean beyond. The interior’s connection to the ocean is reflected in the diptych on one living room wall, its rippled, water-like panels parting to reveal a screen that disappears just as easily as it emerges. More blues emerge in the Fortuny pillows on the custom sofa, and the dots in the wildly popular “spot” piece by Damien Hirst. Anchoring the dining area is the first piece the clients bought for the house, a work by Roy Lichtenstein, its jagged edges softened by Lucien Rollin chairs in a creamy white Nobilis fabric surrounding a custom wood table Weaver modeled after a design by Émile-Jacques Ruhlmann. Oversize, understated Michael Taylor lounge chairs bring in a bit of classic California style. “We love simplicity,” Weaver says. “When you have people in a room, I think the people, the flowers, and the art should make the statement. A great piece of furniture makes its own statement, but it can’t eclipse the people in the room.” 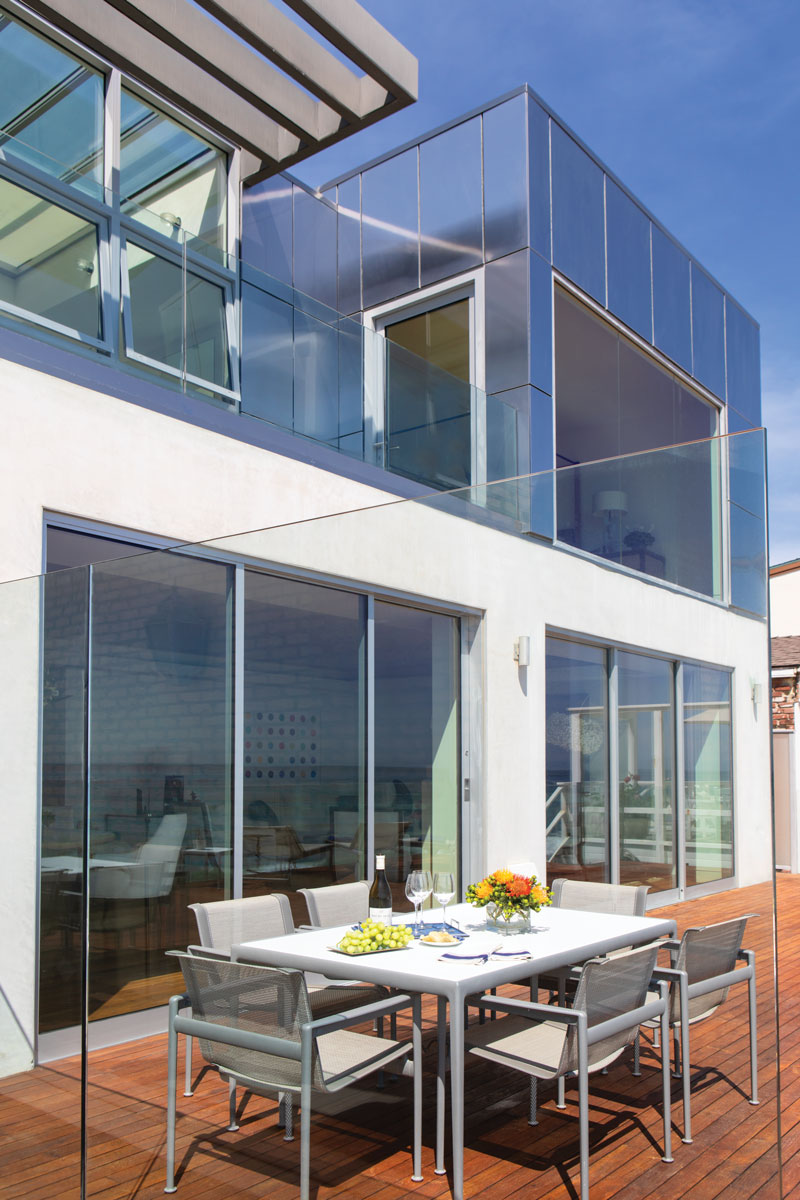 A hall flanked by a guest room and the powder room leads to a central stair that leads up to the master suite, which houses a gym, wine cabinet, bedroom, bath and private terrace. The master bath is almost the same size as the bedroom, and its deep tub from Waterworks evokes a spa-like sanctuary feel. Switch glass fronting the tub takes it from transparent to opaque in a flash. Overhead, the glass skylight roof retracts and “acts as a solarium,” Wilson says. Underfoot, three types of Zeolla marble make up the floor, which Wilson says “was inspired by a Mondrian painting.” Here, as throughout, every line and angle aligns with another by design. “Darrell’s training as an architect ensures that everything is laid out so that all the lines are perfect,” Weaver says. “Every single little detail is covered. Not everybody notices it, but it’s important that that’s how things get laid out.” As in the bath, the ocean is the star of the bedroom, where a modern wood canopy bed from Holly Hunt rests on a rug from Illulian, its stripes mirroring the natural lines of the sand and ocean outside. Soft fabric from Glant covers a pair of nesting benches custom designed for the couple’s three dogs so they can easily hop up on the bed.

Continuing spatial planes was integral to maximizing space in this modest footprint. Hardwood floors that recall a streamline moderne ship’s deck span from the main room out to the oceanside deck, where furniture designed by Richard Schultz picks up the silver of the Marmol Radziner panels that wrap around the house. The Schultz furniture is an apt choice: he designed it specifically for Florence Knoll in 1966 after she requested pieces that would not rust for her seaside Florida home. The hardy materials of the table are offset by elegant Tiffany wine glasses that the couple brings out for their guests who sit and watch the waves lapping at the shore. The house is still very much a classic Malibu beachside bungalow, with a nod to the past and a modern eye to the future. “They come home and this is their refuge,” Weaver says. “They close the door behind them and they have this. Nature is very healing.” Mark Weaver & Associates, markweaver.com 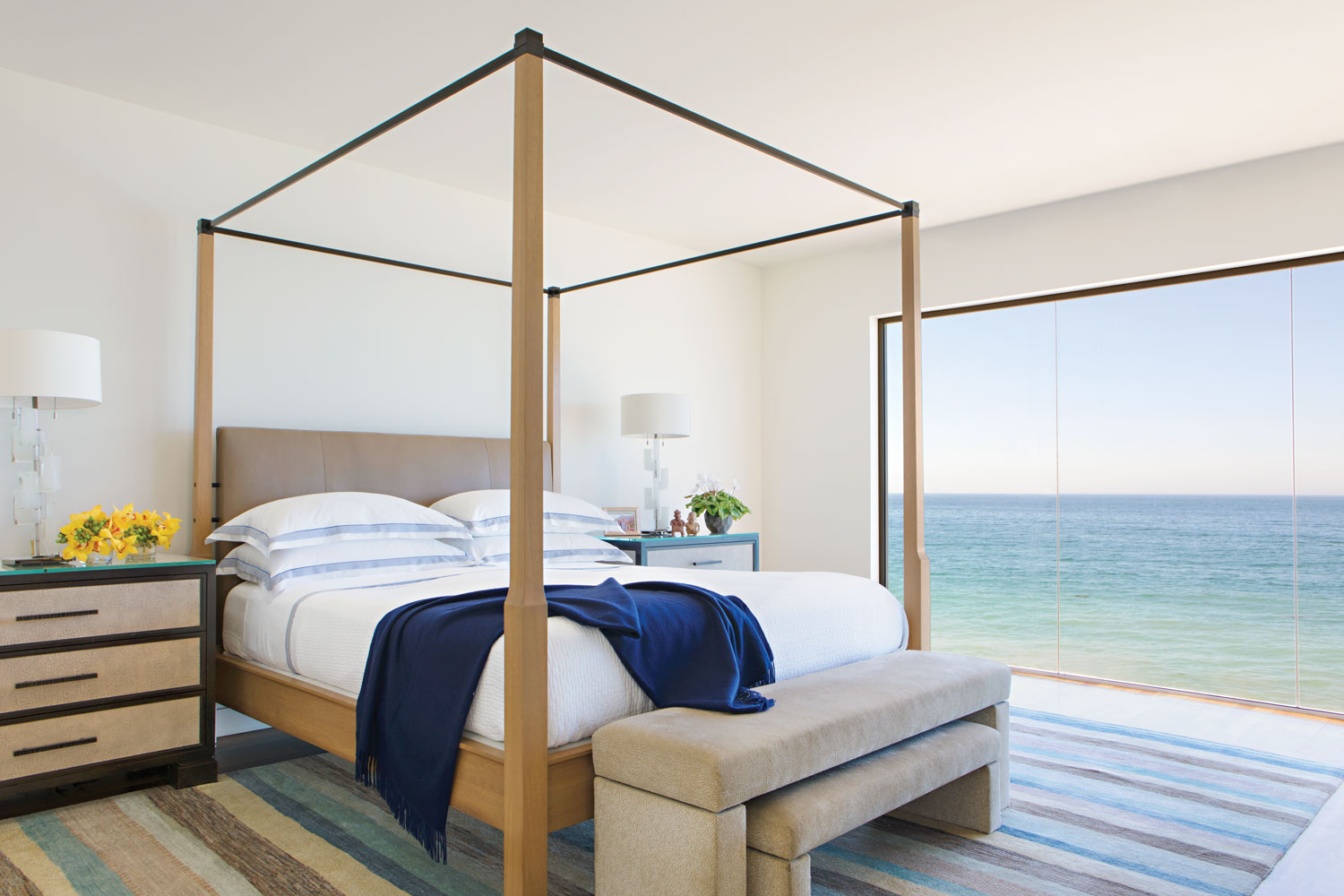