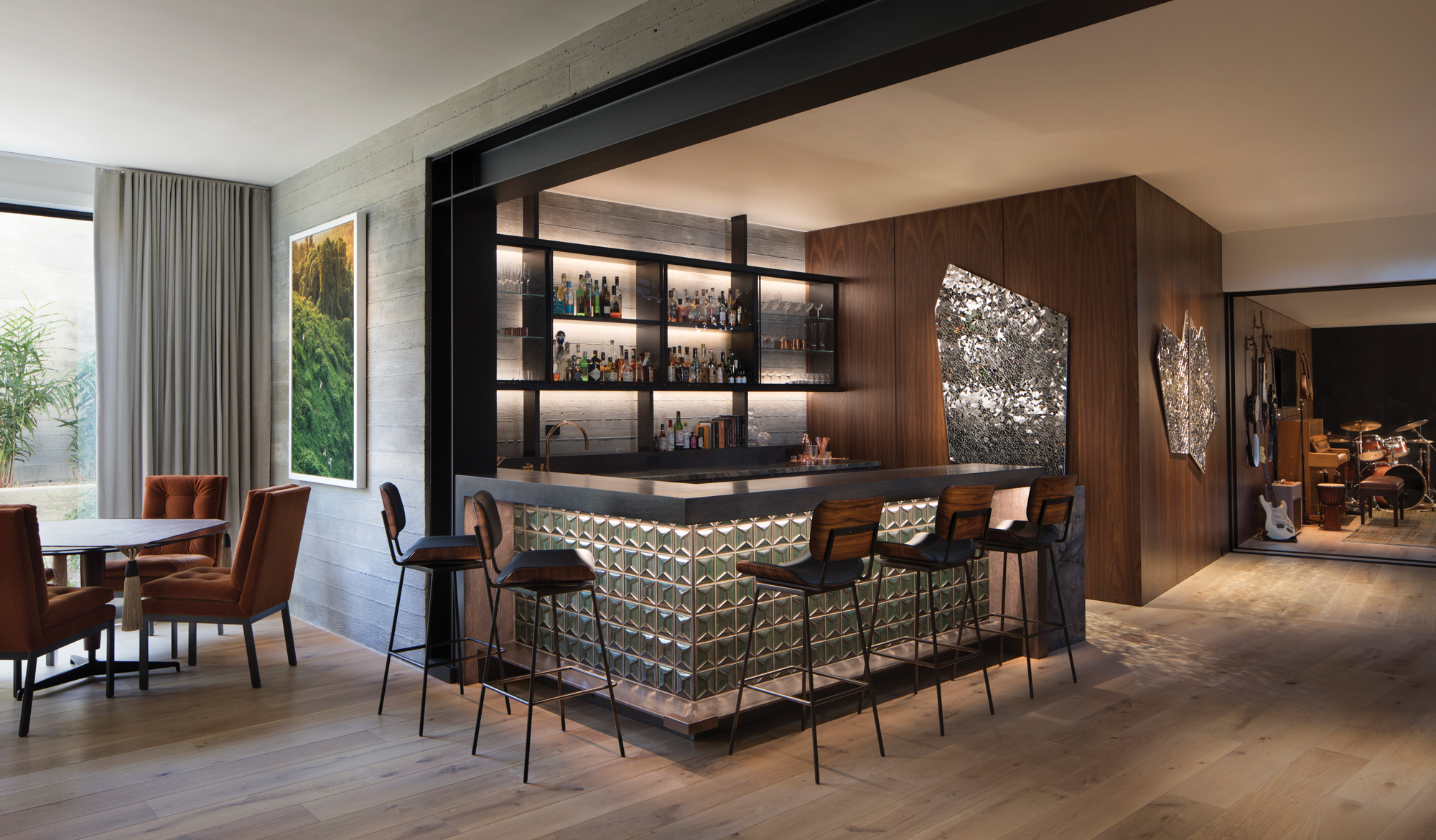 It was not the house they were seeking. But when a couple in Northern California was well underway on another house with architect Jonathan Feldman, they found a modern American farmhouse on a spectacular property filled with native oaks, and the plan shifted. It was not a complete gut job but more of a redo, since the house was well positioned and had a layout that would work for the couple and their two children. To make the process cohesive inside and out, Feldman recruited designer Kendall Wilkinson to help unify the architectural and design vision. “They wanted the design to be bohemian—modern but warm—and they used the word ‘soul,’” Wilkinson says.

That soul began with the architectural changes, which were few but impactful. “One of the big moves was opening up the courtyard,” says Feldman, who removed superfluous obstructions to improve its shape. The courtyard is the first thing one sees from the entrance, through floor-to-ceiling double-height glass windows. Another major change originated in the same area: the main staircase around which the house flows. “It was massive, and basically blocking the entrance,” Feldman says. The antidote became a single stringer down the middle, on which the team placed wood treads, lined on the outside edge by a nearly invisible metal mesh railing.

Anchored by Alec Soth’s Near Kaaterskill Falls, which captures a man in a backwards dive toward the water—a fitting metaphor for a house remodel—the entrance sets the tone for the extensive changes to the interiors. Its board-formed concrete wall and French white oak floors continue into the adjacent living room, where Wilkinson introduced vintage modern finds like Kofod-Larsen Seal chairs from MidcenturyLA, pairing them with new pieces such as a sleek Gray sofa from Bright Chair. Pacific, a photograph by Richard Misrach, adds a calming, solitary tone. The couple called upon art consultant Allison Harding to help them build a personal collection that was meaningful for their family. “We asked Allison to work with us and educate us, and that was the real game changer for our collection,” says the homeowner. “While the vast majority of our collection is comprised of female artists, the male artists in our collection are either local artists or represented by local galleries.”

Art commands every room but does not dominate, balancing naturally with the design and landscape. In the great room, which includes a sitting area and an open kitchen, the furnishings are more central. “One should go into a room and take the whole space in,” says Wilkinson. “For the great room, which is a really large space, we created different moments so you don’t feel like there’s this vast room around you.” Among those moments is the sitting area, where a pair of Holly Hunt sofas are joined by midcentury Italian cane chairs covered in a green fabric from Brunschwig & Fils that recalls vintage hues. Feldman’s associate, project manager Chris Kurrle, envisioned a custom blackened steel fireplace to replace an existing simple concrete fire box. All the surfaces and materials received an upgrade: The drywall was traded out for rift white oak, and in the professional-grade kitchen (the wife is an accomplished chef), the counters are Taj Mahal leathered quartzite. Above, a slender pendant from Roll & Hill provides an artistic finish.

Downstairs, a game room leads to a bar, where Threshold, a series of wall sculptures by Sanaz Mazinani reflects the floor’s limited light. The bar is set apart by an opening framed by I beams, a clever addition by Feldman and Kurrle that not only adds visual interest but satisfies a structural need: absorbing the load created by their opening up a concrete wall that once continued from the entrance and living room directly above. “It’s more beautiful, and a little old school, to show how buildings are made,” Feldman says. Hidden lighting fronting the bar throws light downward onto tile from Heath Ceramics, while wood and leather barstools are among several favorite pieces in the house Wilkinson sourced from Thomas Hayes in Los Angeles. Nearby, the team turned a home theater into a band room, used by the whole family—especially by the husband, who plays guitar and sings in a band. “The band room is very retro, with a ’60s rock vibe to it,” says Wilkinson, who masterfully introduced acoustic finishes, adding a Dante V ceiling pendant from Downtown she picked up because it reminded her of a drum set. Joining a collection of guitars hanging on the wall is One Love Leads To Another, a photo by Tammy Rae Carland starring dozens of cassette tapes.

On the top floor, the mood changes dramatically in the master suite, where the team allowed the natural world to serve as more than a background. Heath Ceramics tile lines one wall of the master bathroom, adding texture and bringing in the grays of the branches of the oak trees outside. For the master bedroom, Wilkinson wrapped the bed in a soft Deco fabric from Donghia (“The bed almost disappears,” she says) and allowed natural light to lead, save for a pair of Libro sconces from Holly Hunt for nighttime reading. “It’s not a large bedroom, and we kept the design clean so we wouldn’t take too much away from the focal point, which is the trees and the view,” Wilkinson adds. “We allowed the interiors to groove with the spectacular setting.” It is an approach that has just the right amount of soul. Feldman Architecture, feldmanarchitecture.com; Kendall Wilkinson, kendallwilkinson.com 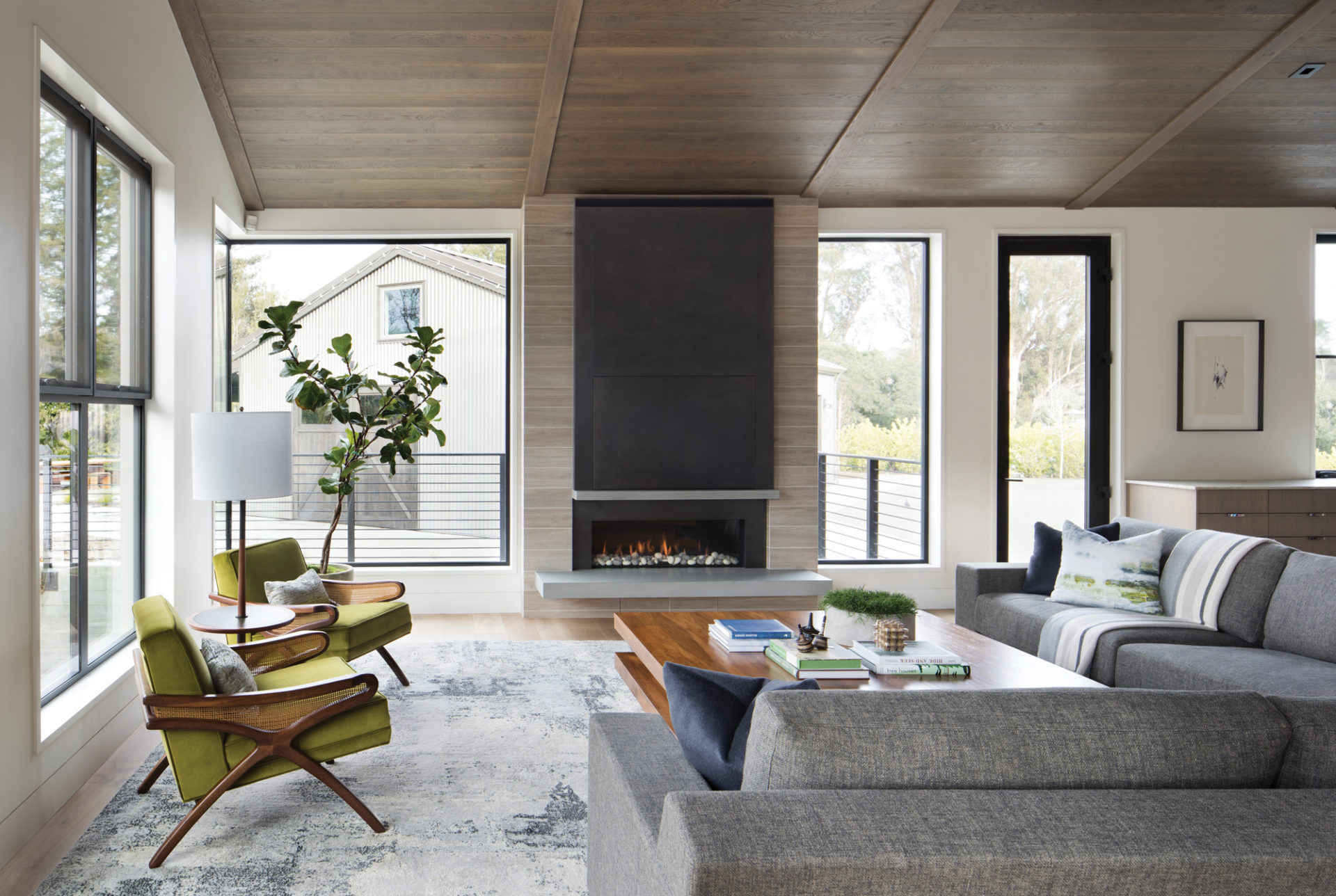 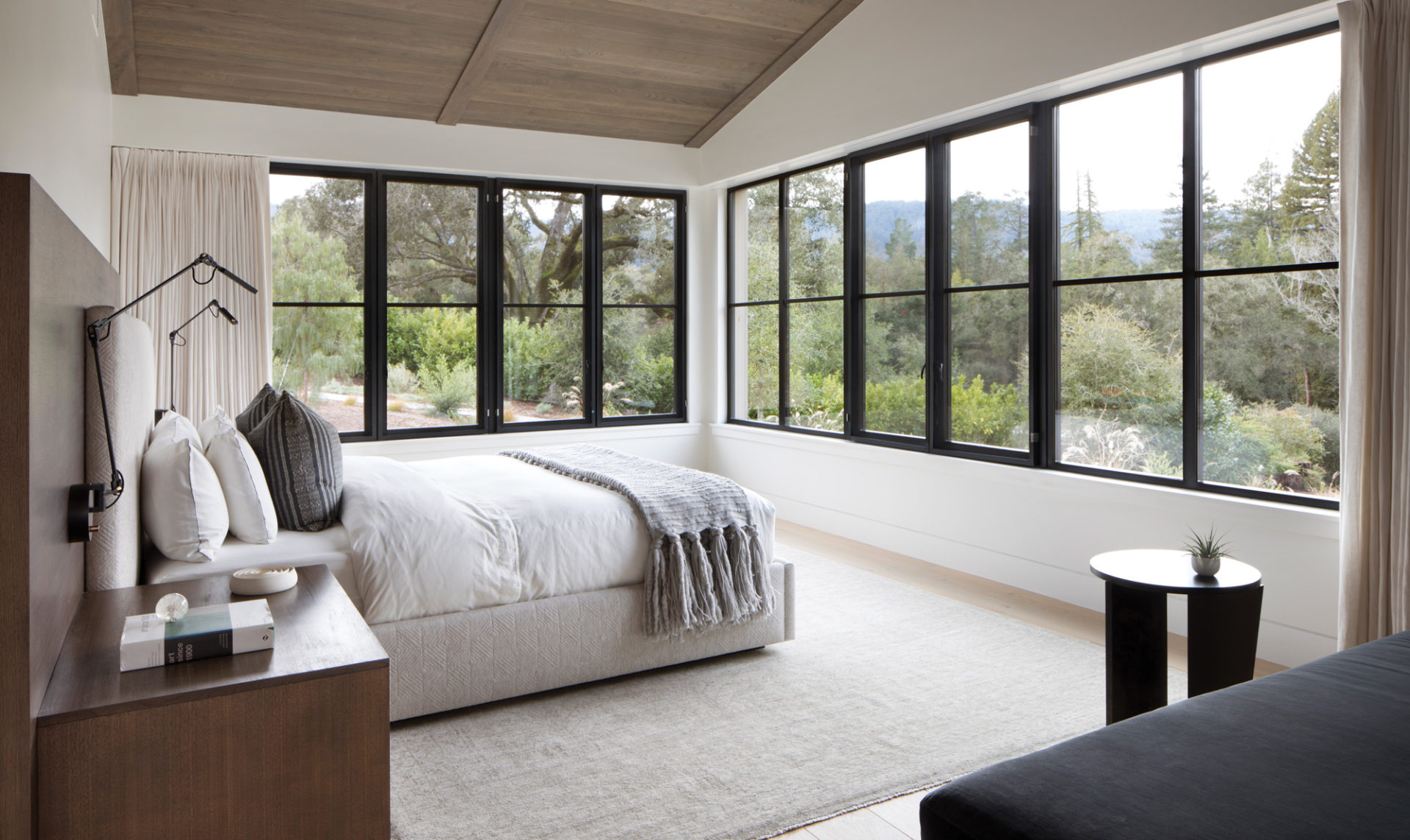