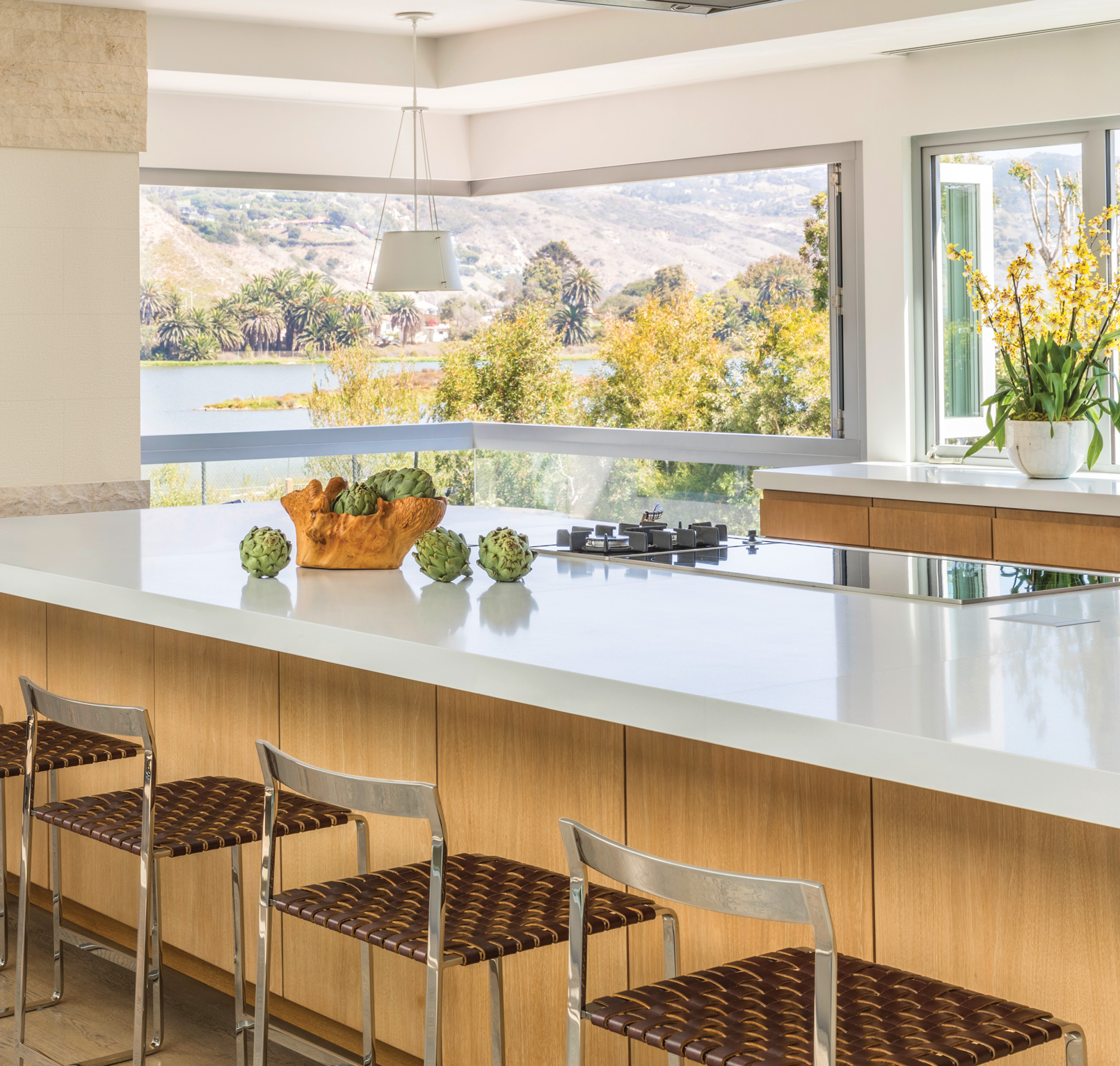 Malibu Colony, otherwise known as The Colony or, depending on how long you’ve been around, the Malibu Movie Colony, rests on a formidable legacy shaped by Hollywood elite, occupying one of the most pristine stretches of coastline in California. It is here that the “it” talent began building beach shacks in the 1920s; those morphed into seaside pieds-à-terre, which then became full-time residences, forming an eclectic, artistic, occasionally gossipy—scandalous, even—yet tight-knit community. When land was dirt cheap, celebrities would snap up a beachfront lot for their beach house, plus the lot just across the street for a tennis court or garden. It was on one of these “across the way” lots—never built upon, a rarity even in a less in-demand neighborhood—that a developer began the notoriously long process of building a house in Malibu for himself and his young son. The process was so time consuming, in fact, that he met his future wife, who he would marry on the property, and together they welcomed a daughter.

Over the years, all the pieces fell into place: In addition to their lot on which their house was being built, the owners were able to acquire the lot to the east—which is said to have held the original Movie Colony tennis court, frequented by Mary Pickford and Charlie Chaplin—for their own tennis court, and, in an extraordinary stroke of luck, the lot to the west, a defunct tennis court that would become an outdoor sanctuary. “The original bachelor pad evolved into a family house,” says AIA architect Darren Domingue of Domicile Design, who, with the help of Molly Lagüe and Thanoo Chantaruchirakorn from his office, helped the homeowner shape his original vision of a contemporary house—with a twist. Because the lot was not on the ocean side, it had a “reverse” view back across the Malibu Lagoon, past the famous Surfrider Beach and to the mountains beyond. “So we flipped the house upside down and reversed all the rooms,” says the homeowner. Where one would expect the usual configuration of the main living rooms downstairs and the bedrooms upstairs, the team upended this, reserving the first floor for the office, media and family rooms, and saving the second floor for the living, dining, kitchen, billiard room and bedrooms, the latter relegated to the street side so the former would receive the full effect of the vistas. Another stair, so flooded with light it is difficult to distinguish it from the outdoors, leads to a roof deck. 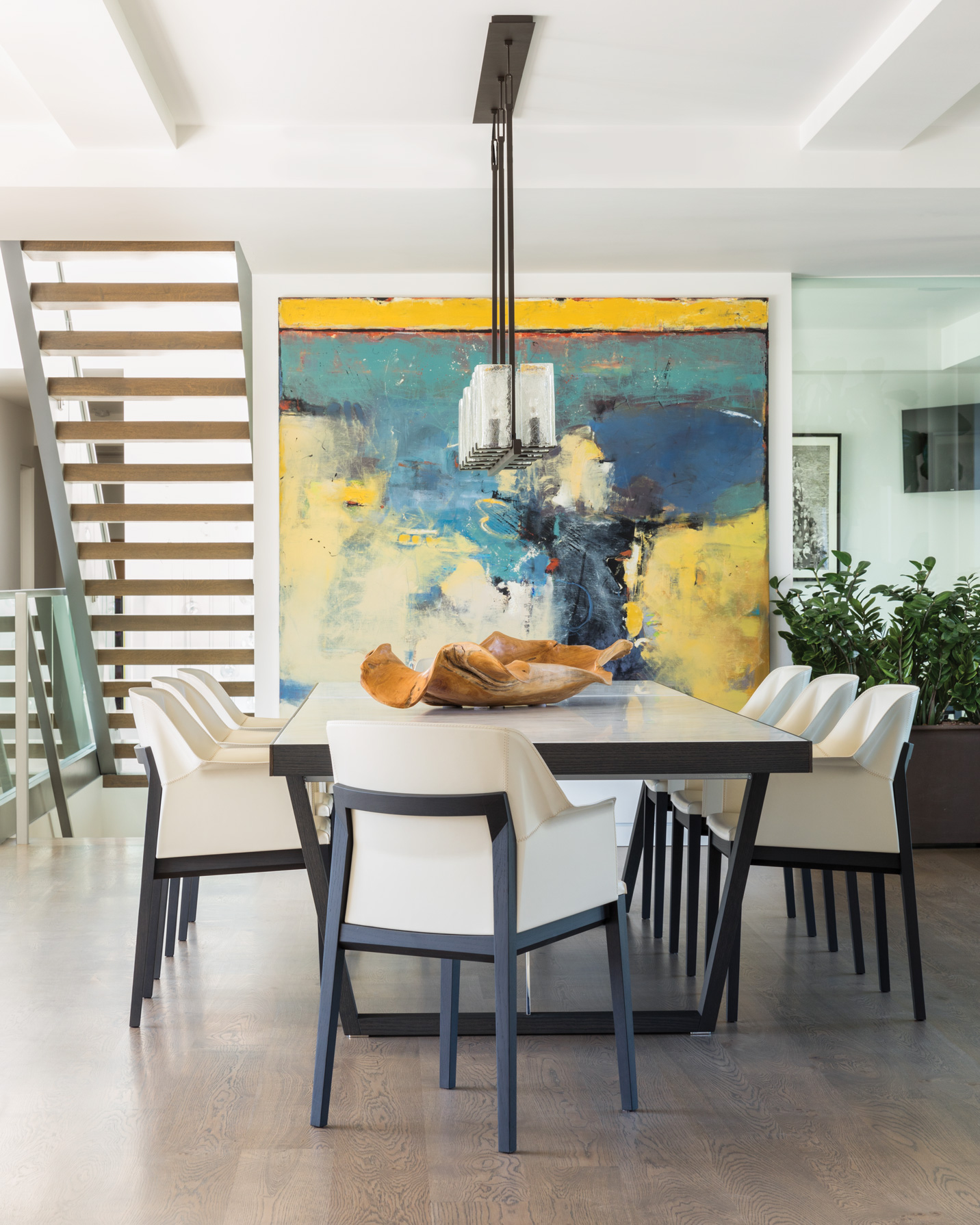 Both husband and wife wanted a light, contemporary feel, which Domingue answered with horizontal planes and modern materials: steel, glass, teak, stucco and, inside, imported Jerusalem limestone, which provides an exquisite tactile effect. “Everything at the beach has to be designed for a marine environment,” notes Domingue, who worked on a house in the Colony nearby, and designs other coastal homes. Within this relatively modest footprint for Malibu, Domingue used a bit of magic to maximize space, such as continuing the living room’s deep coffered ceiling out to the adjacent terrace. “Continuing surfaces and planes from the inside out creates an illusion of a larger space, drawing your eye beyond to the white water ocean view,” Domingue says.

For the interiors, the wife worked closely with designer Naomi Stroh. “The architecture is modern, and marrying the look of the inside with the outside was very important,” Stroh says. “This idea lead us to clean lines and a natural palette that let the outside speak to the inside and vice versa, effortlessly. This is also a family home, so durability and functionality were key.” If a favorite indoor spot exists, it’s the living room, says Stroh. “It is directly connected to a deck that overlooks the lagoon and the beach, where you see surfers catching waves all day.” The family enjoys “the swivel of the James Magni leather chairs and the long, cozy sofa,” Stroh says. “The natural color palette also allows the residents to decorate the coffee table with colorful flowers or holiday decorations without it fighting with the rest of the room. It’s a place they can always make their own and evolve in.” Joining the Magni chairs are a Liaigre table, custom furniture of Stroh’s design, and strong pieces that bring soul to the rooms, like a chandelier and sconces from Fuse Lighting in the dining room and powder room, respectively, the Elana bench from Bright Chair in the master bedroom, and, on the terrace, a table and chairs from Dedon. Artwork by Mr. Brainwash and C.W. Slade add splashes of color and vibrance.

When it came to the exterior design, the couple called upon Scott Shrader, who, like Domingue, has worked extensively in the area. “Our job with Scott was not to say no,” the homeowner says with a laugh. “It was to say, ‘Scott, go. Just do your thing.’ ” So he did. Shrader began as he always does, by considering the core design of the house. “Most of my work starts with the interiors,” Shrader says. “My job is to first understand the look and feel and take that interior feeling outdoors.” To achieve this, he suggested unifying house and gardens with “an outdoor environment for entertaining family and friends, including a large outdoor dining area and casual lounge next to the fireplace, which also become the major focal point and connector of the property.” A long dining table Shrader crafted from recycled scaffolding planks sits beneath a covered loggia surrounded by greenery. Shrader integrated California native and compatible Mediterranean plants, including Metrosideros, lavender, rosemary, coppertone loquat, Pride of Madeira, and pittosporum. He also used extensive gravel “to help give the property a sense of casualness,” he says. “The look and sound of gravel always makes me feel like I’m somewhere in Europe and not in L.A., which I love. It’s also very sustainable.”

Tucked off to one side near the entrance is an area Shrader calls the Hello and Goodbye Garden. “I like to tell people that the story always starts when someone walks onto your property; it does not start at the front door,” Shrader says. “There is so much one can learn about the owners when approaching the front door to a home. The Hello and Goodbye Garden is just that concept—it’s the first chance you get to say hello to your guests and the last time you get to say goodbye. I also like this garden to help slow people down, giving them a space to step into and out of the world they just came from.” Darren Domingue, Domicile Design, domiciledesign.com; Naomi Stroh, naomistroh.com; Scott Shrader, shraderdesign.com 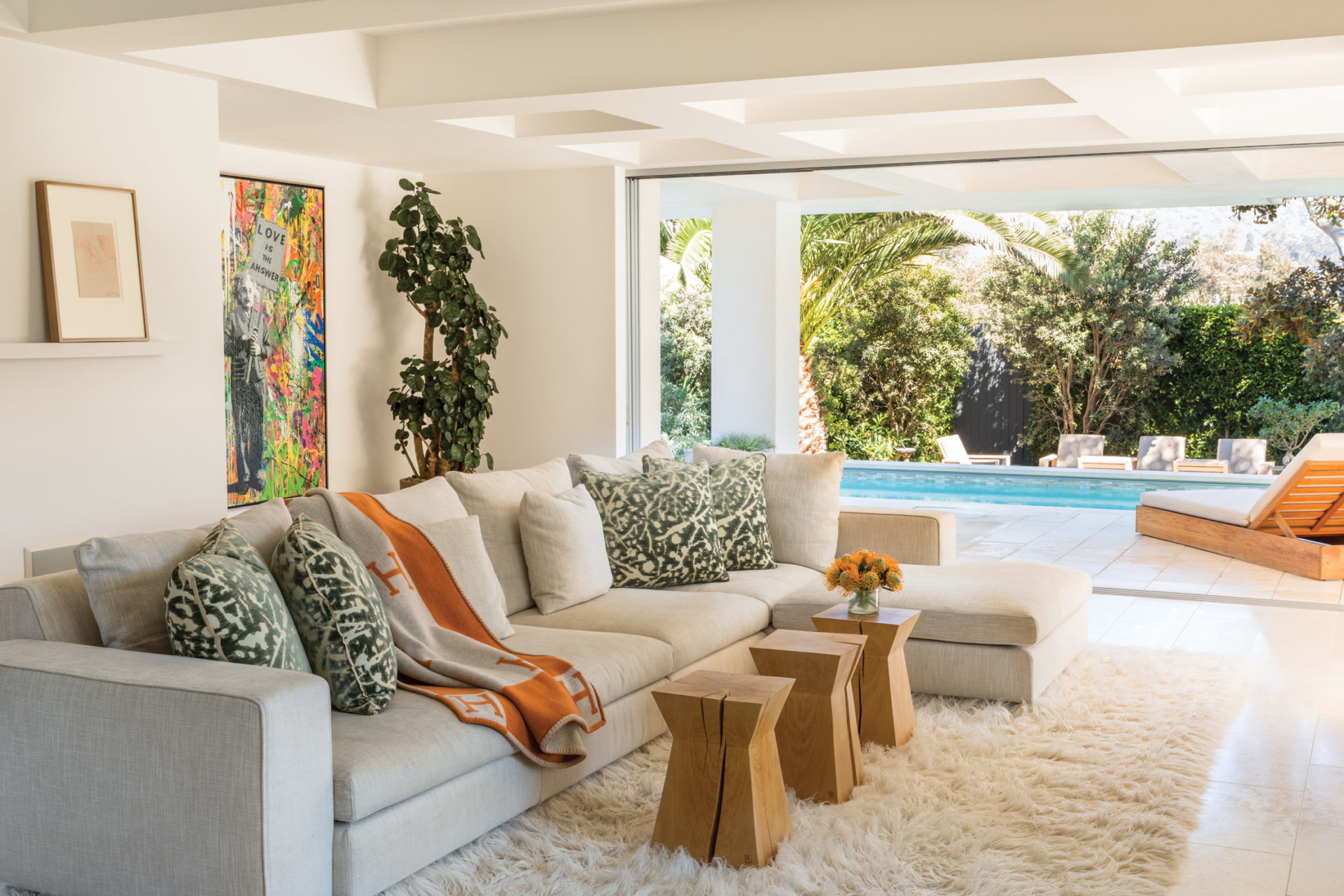 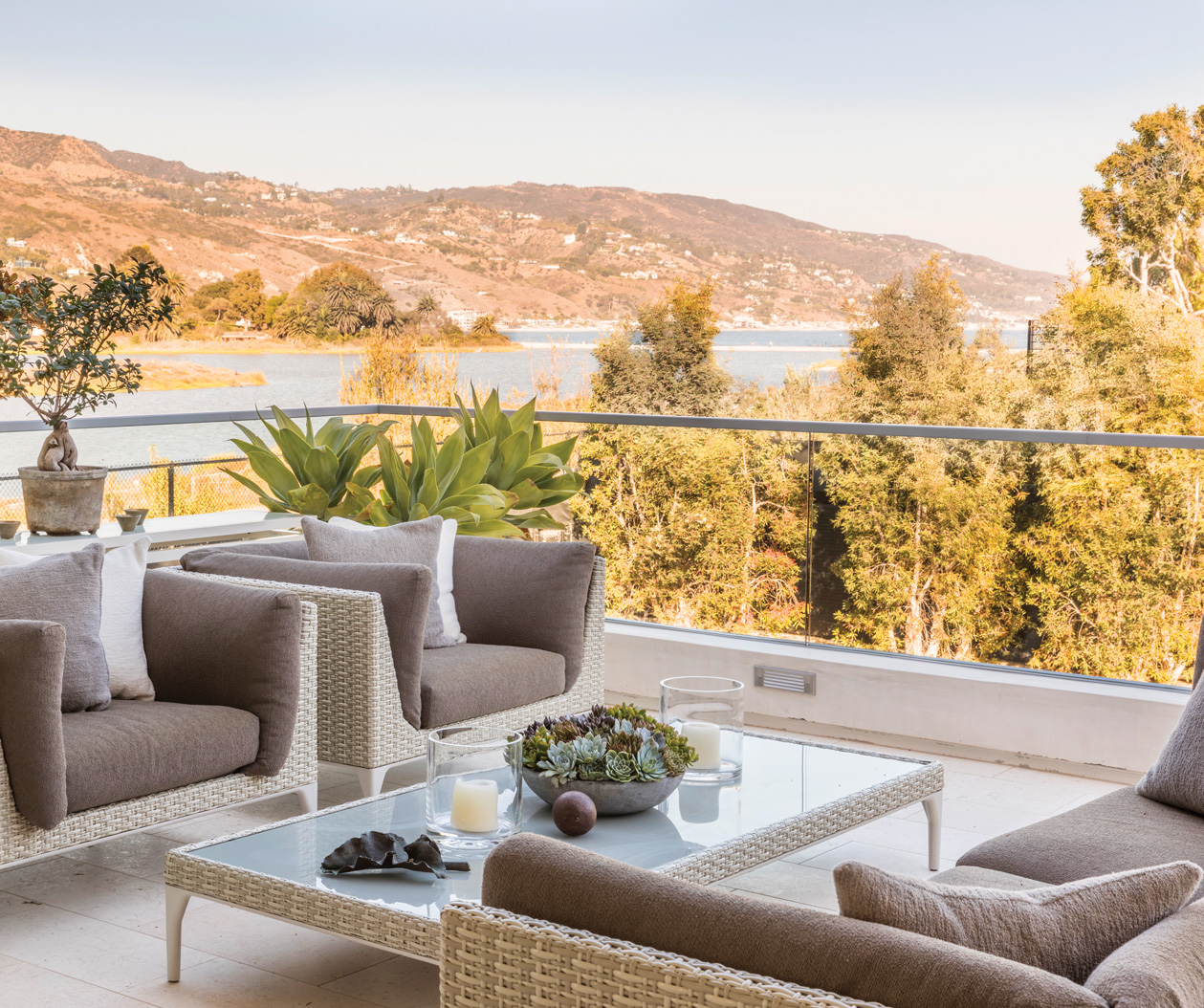