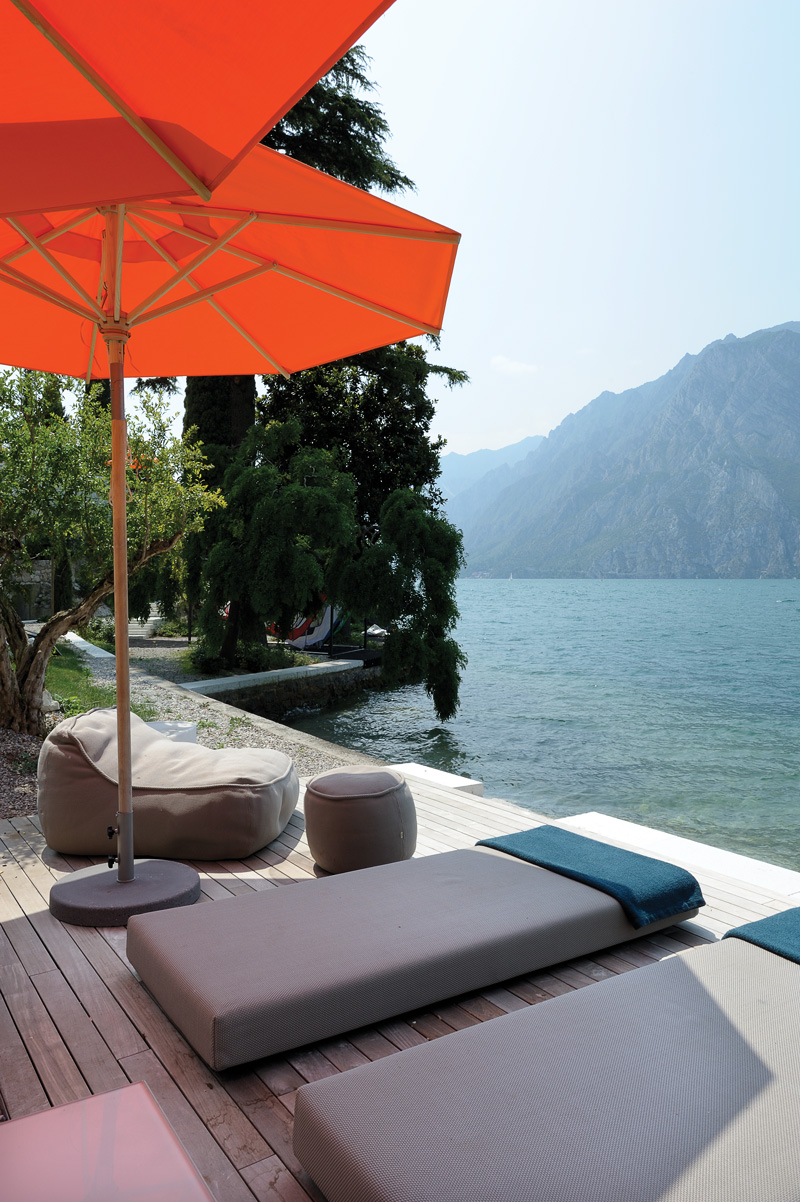 The breathtaking beauty of Lake Garda in northern Italy, with its mild climate, clear water, magnificent mountains and lush vegetation, has always attracted tourists from all over the world. In 1786 Johann Wolfgang von Goethe discovered this paradise, followed by James Joyce, Thomas Mann and many other iconic intellectuals. The same allure brought a young German couple with three children to Torbole, an adorable small village bordering the lake, where they found an ideal site to built the abode of their dreams.

They hired architect Andrea Rigo from Plan Architettura, based in Arco—another small village on the lake—and asked him to design a casual and comfortable house they could share with friends and family. But first, Rigo had to demolish an existing smaller house dating from the early 1900s. Rigo worked with the site’s existing slope and natural contours to integrate a 5,000-square-foot house, taking special care to design it around existing trees: a cedar from Lebanon, a magnolia and a secular olive tree. Serving as a buffer between the trees, the lake and the house, a private beach and patio, the latter decorated with Float and Aqua daybeds by Paola Lenti, provides respite. Overhead are bright orange umbrellas by Weishäupl that play well off all the blue.

I was so excited—and deeply moved—to do this project on my beautiful homeland, which I love as much as my clients do,” says Rigo. “I molded the home’s construction around two levels—one facing a limestone-covered wall. I gave the second floor a Z shape to maximize the beautiful view and let nature penetrate the house.” He positioned the house to capture the northern evening breeze, which acts as a natural cooling system. “I also protected the house against Ora, a typical wind in our region that blows in strong gusts and is ideal for surfers and kite lovers, but less so for people looking to relax and sunbathe on the beach,” Rigo says. 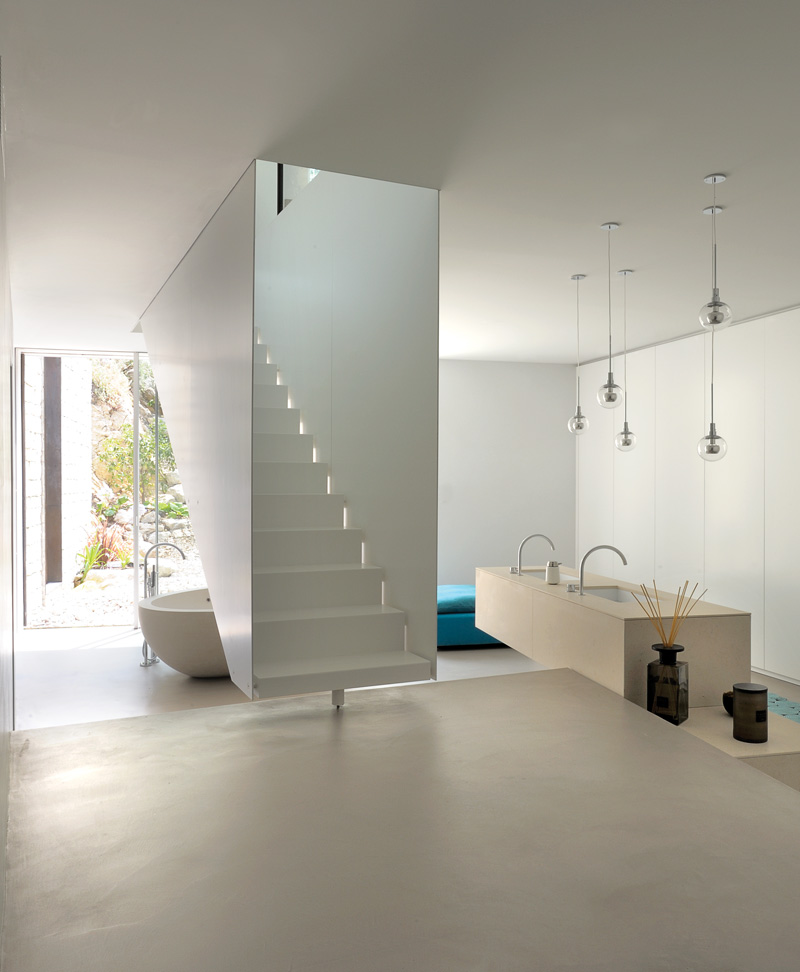 At the owners request, Rigo designed bright, elegant interiors. The living room on the first floor is the real fulcrum of the house, establishing a perfect dialogue with the outdoors. Expansive floor-to-ceiling windows allow in daylight and reveal a marvelous view of the charming lakeside town of Riva del Garda and the spectacular Brenta Dolomites beyond. Rigo made the large space more cozy with sofas of his design and handmade carpets from Kinnasand in muted primary colors. Nearby, the open dining room is made up of a linear wood table by Philippe Mainzer surrounded by Taormina chairs from Alias in different tones of blue. Overhead, Swarovski globe lights almost disappear into the views.

In the small sitting room near the entrance, dominating the walls are two paintings from Cornelius Volker’s Hands series, one just above a stairway leading to the bedrooms on the second floor. The master bedroom, which overlooks a private garden surrounded by rocks and fruit trees, occupies a small landing, with the bed situated right against the window. The opposite wall is decorated with a large vinyl flower from Wall&decò, making for a joyful interior view for the couple.

The room is connected to the bathroom below via a “floating” sculptural white metal stair, tucked behind which is a contemporary tub by designer Claudio Silvestrin for Boffi and a double sink covered in Bihara stone. When asked about which part of the house had given him the greatest joy to create, Rigo says, “Definitely the bathroom, to which I wanted to give a very pure, minimal, almost abstract look and a serene feeling.”

During the extended construction phase, the architect discovered one of the home’s secrets from the past: a bunker, built by the Italian Army during World War II as a defense system—a long underground stone shaft with an entrance not far from the lake. Rigo retained the structural integrity, reinventing only its purpose. At the end of the gravel-floored tunnel, Rigo designed a relaxation area framed by glass panels, edged in a flamboyant orangey red and equipped with a large sauna. It is a perfect finish to sunbathing on the beach and swimming in the crystal waters, against the majestic mountains, sometimes graced by a soupçon of snow. Plan Architettura, plan-architettura.it 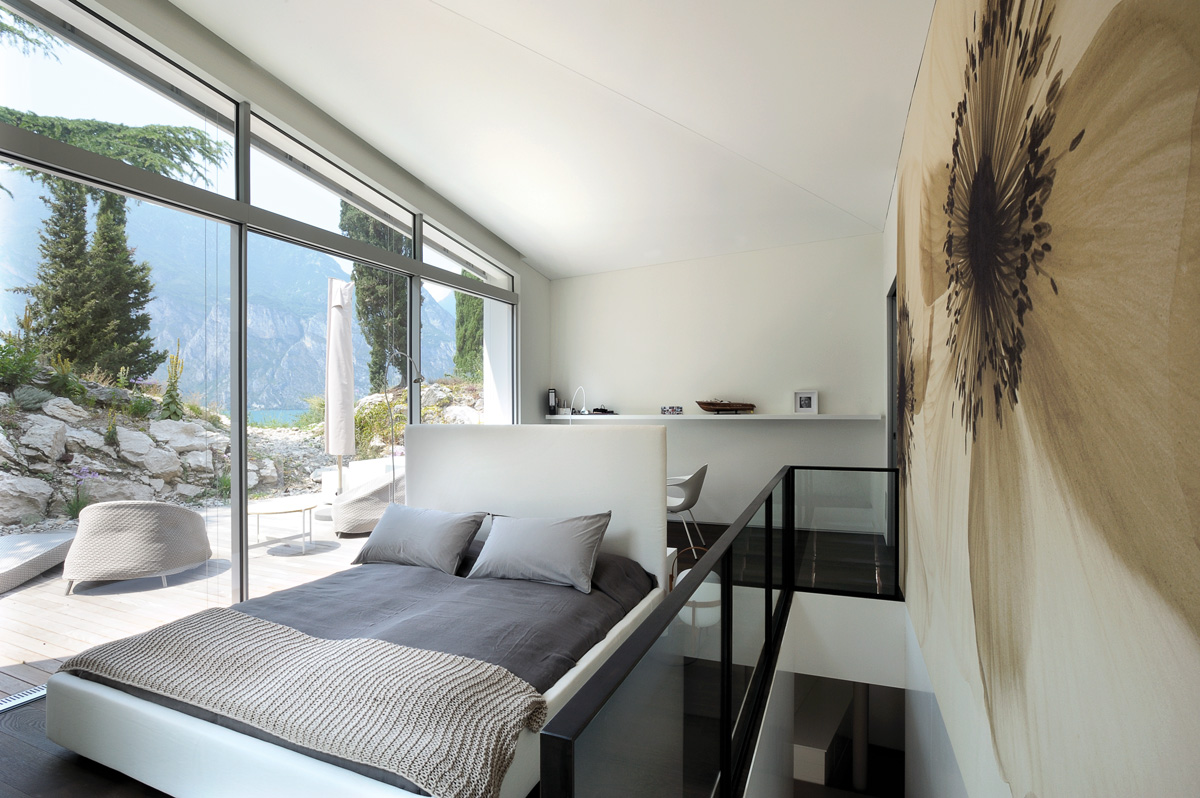