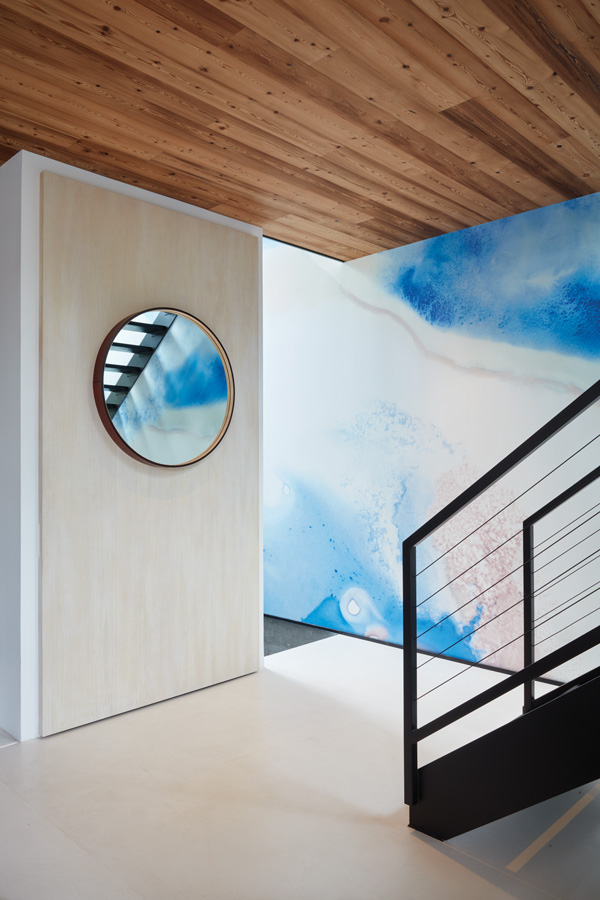 The first thing one sees when they step into a vertical, loftlike house just blocks from the beach in Venice, California, is an homage to the ocean in the form of a large watercolor wallpaper mural depicting an abstracted image of a crashing wave. The piece, by Black Crow Studios, “is a unifying factor in the design,” says Jamie Bush, who renovated and redesigned the home for a young entrepreneur. The wave, which spans three floors, is offset by a new, modern black steel staircase Bush refers to as “a design object.” A round leather mirror hung opposite the staircase frames this juxtaposition of beachy and edgy elements, capturing a kind of interplay found throughout the design.

The space opens to the living room, centered by a custom table with ridges reminiscent of wind-blown sand, or the corduroy lines of endless approaching waves. Bush likens the table’s exaggerated carvings to the rings in the cross section of tree trunk, set upon sculpted legs and lacquered in white. A 1970s driftwood lounge chair from Northern California, an Akari floor lamp by Isamu Noguchi and 1960s leather and wood stools by Brazilian modernist Percival Lafer round out the perfect California blend. “There are slightly boho Venice touches throughout, with earthy, casual finishes,” Bush says of the design. Nearby, the modest kitchen houses little more than a butterfly print by Samuel Bayer, an extendable Douglas fir table, and chairs from Jens Risom; the room’s European larch ceiling and white floors continue from the adjacent living room. “I love doing white floors in spaces with wood ceilings—you get this dreamy white envelope with natural textures,” Bush says. “Instead of concentrating all the wood on the floor, wood elements against a white floor are more surreal.”

The mood changes downstairs, where the house dips halfway into the earth, cradling the partially subterranean media room and music room. Wood is evoked in the media room’s board-formed concrete walls, against which hangs a photograph from Bush’s “May Company Building” series. “I wanted that embedded, cave-like feeling for this room,” he says. For the nearby music room, which doubles as an office and guest space, Bush arranged custom aqua acoustic panels “like puzzle pieces” to accommodate a new avocation of the client’s: learning to play the drums. “That’s the last thing you want in a concrete shell,” Bush says with a laugh. He layered area rugs and introduced dropped ceilings to complete the sound-damping effect, all of it combining to achieve the “dark and cozy and playful” space he sought to create.

As one moves upward in the house, a sense of lightness returns. The master bedroom is awash in whites and a blend of textures, with color and depth coming from a free-form 1970s wood sculpture, an abstract artwork by Phil Wagner, a pigment lithograph by Ross Bleckner and a Moroccan rug with electric blue and purple accents from Marc Phillips. The bedroom floors make up the top of what Bush calls a “wood sandwich,” the bottom of which is the ceiling of the main rooms just below. “As you go up and down the stairs, it reads as one piece of wood,” Bush notes. Wood continues on the new roof deck, with low-slung chairs and sofas by Paola Lenti in blue and green Summit and Thomas Lavin fabrics, all attuned to the water views. Here, the faint beat of a fledgling drummer can almost be detected in the distance, and the ocean—so integral to the home’s design—is never far away. Jamie Bush, jamiebush.com 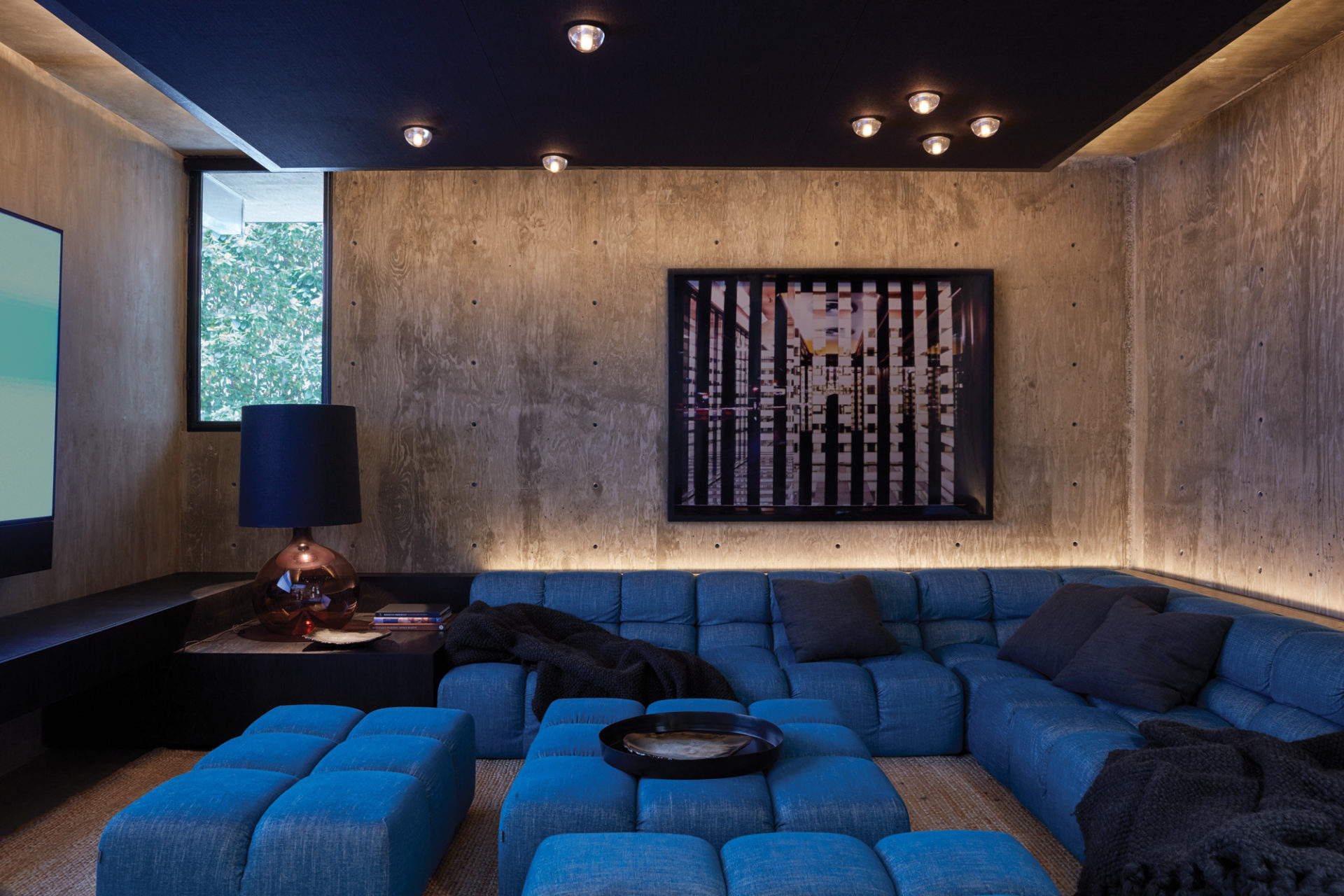 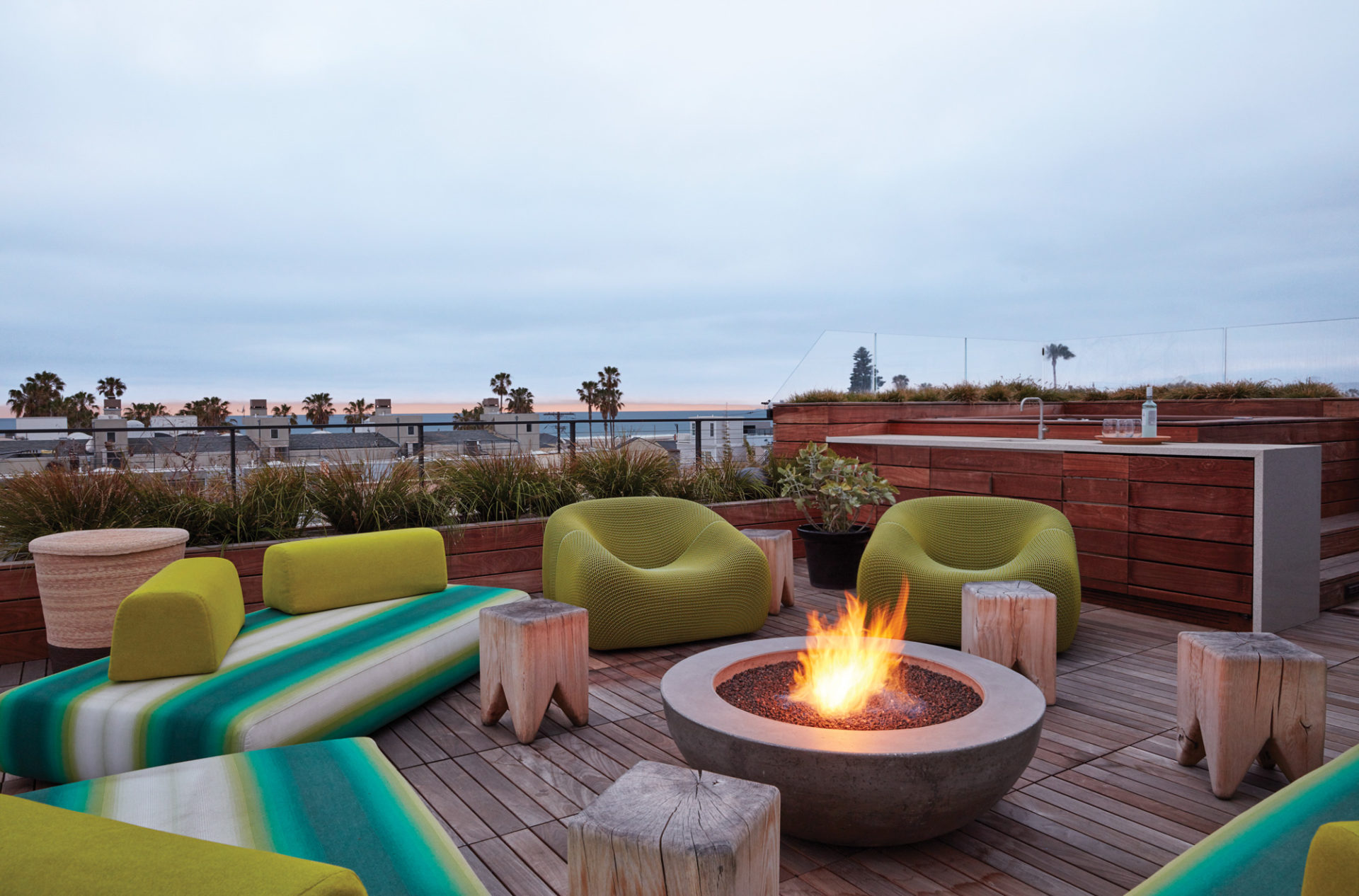