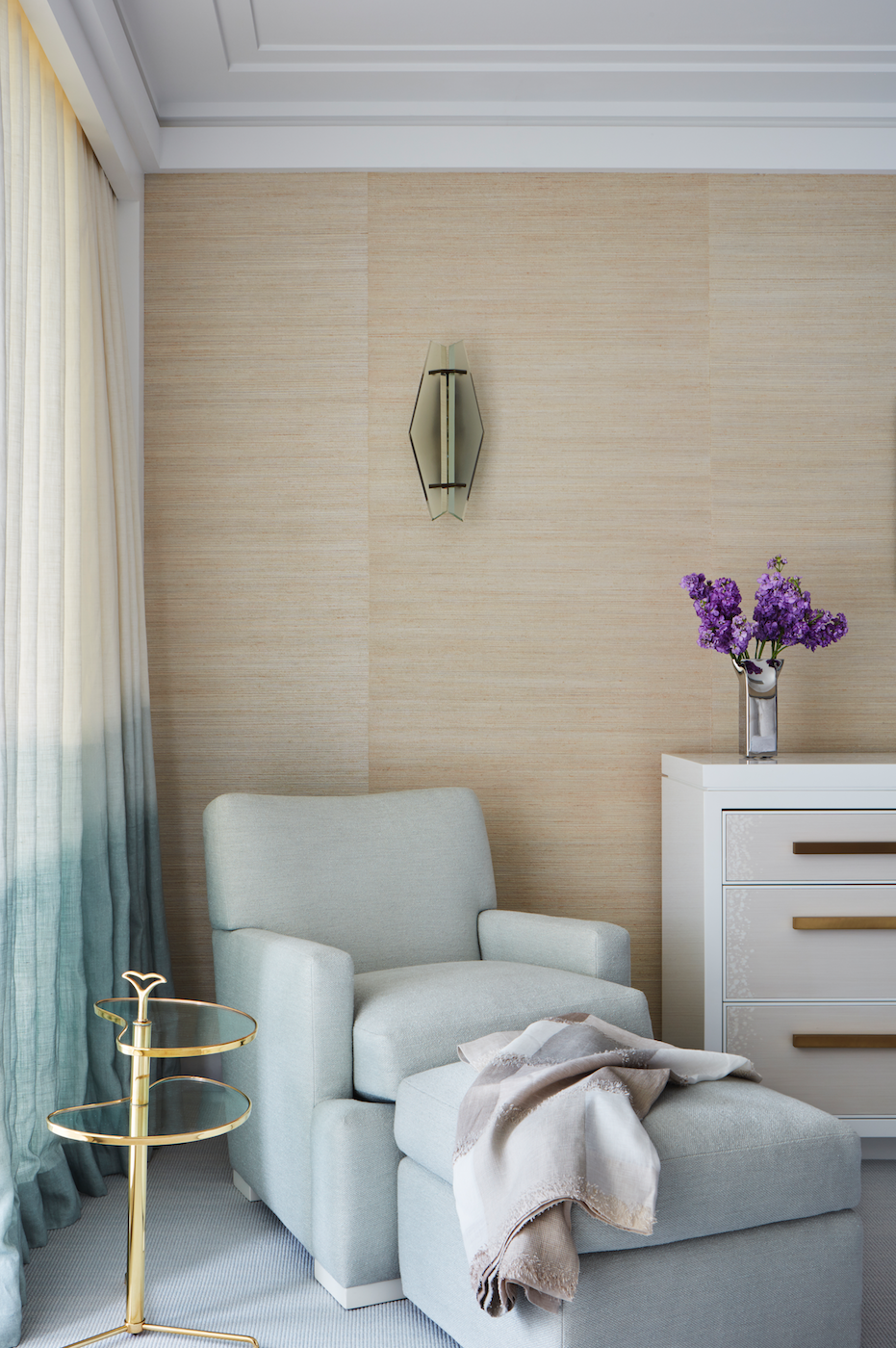 Palm Beach was the tropical retreat of the Kennedy clan in the 1950s and ’60s—a time when the kings of Jordan or Spain could be spotted dining on coquilles Saint Jacques at the long-gone Petite Marmite, and celebrities such as Frank Sinatra knocked back Jack Daniels at the swankest nightclubs. “We wanted this to feel like a younger throwback to that heyday,” says Kristine Greenblatt, studio director in charge of decorating at the New York–based design firm Pembrooke & Ives, which was tasked with refurbishing this 3,700-square-foot apartment for a couple. (Also on board were the firm’s founder, Andrew Sheinman, and studio director in charge of interior architecture Peggy Gubelmann). Outright mimicry, however, wouldn’t fly. “We tried to go with something more understated,” says Sheinman, who took his cue from one of the clients. “She has incredible style—very simple, strong lines, nothing frilly or embellished.” Having worked with the homeowners on a previous New York residence, Greenblatt also knew the desired palette would be creamy, to serve as a backdrop for pieces from the clients’ impressive art collection.

After completely gutting the space, Gubelmann reconfigured rooms, imparting a sense of procession befitting some of Palm Beach’s grander estates. Visitors are introduced to honed limestone floors in the elevator lobby, where two mirrored works by Françoise Turner-Larcade deliver a high-impact welcome. “Form meets function perfectly here,” says Sheinman, pointing out that the proportions of the piece distract attention from the modest dimensions of the space, while its reflective surfaces allow visitors to adjust themselves before proceeding. 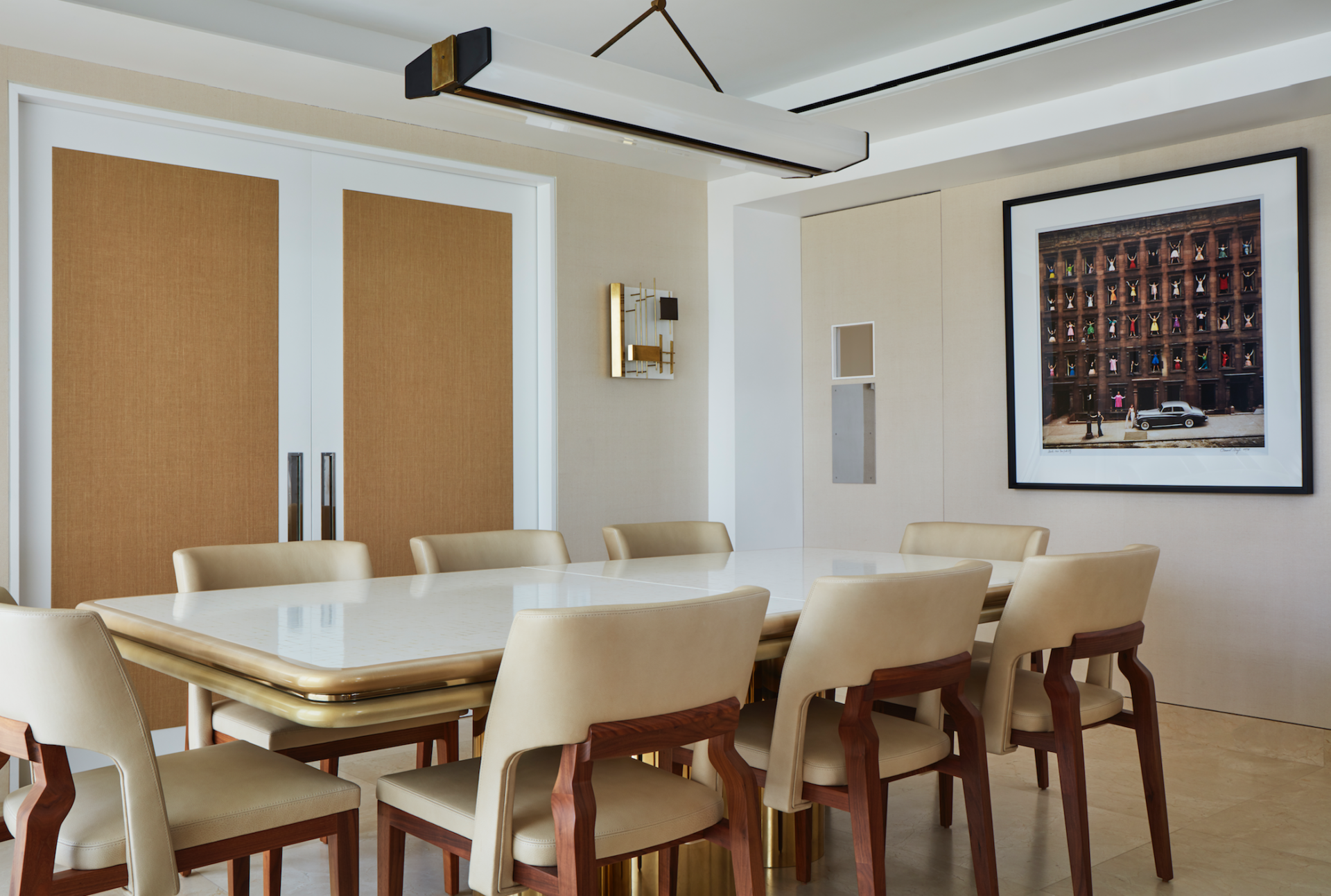 The Palm Beach reference is less obvious here, manifesting in throw pillows covered in orange Fortuny and Jim Thompson fabrics—“a nod to Lilly Pulitzer,” says Greenblatt—and the thick green glass of James Magni’s Jewel side tables, which, she adds, echo the liquid Intracoastal Waterway views. Italian midcentury lighting appears again with Gio Ponti sconces in the dining room and a 1950s Stilnovo fixture over a refinished Karl Springer dining table. “When you have a space that’s this clean,” says Greenblatt, “you need to have that chic lighting to complete every room.” The minimalist furniture called for tables with distinct sculptural character—another Springer and a Jiun Ho two-part, white-lacquered custom coffee table in the seating area with the Boerner chairs.

Appropriate to the beachy setting, notes Sheinman, other than the Léger, “The art is more whimsical, not as much of a commitment.” This includes a 14-part ceramic wall piece by Maren Kloppmann that creates interesting shadows throughout the day, and Ormond Gigli’s 1960 Girls in the Windows. In the clubby family room, warm cerused oak paneling frames the undulating wood of a Caste Design coffee table, the Holly Hunt fabric and leather of the lounge chair, and the Holland and Sherry chenille of the Profiles sofa. On the wall, a 1970s image of Warhol photographing Bianca Jagger in a London nightclub “is a departure from all the softness,” says Greenblatt. Pembrooke & Ives, pembrookeandives.com 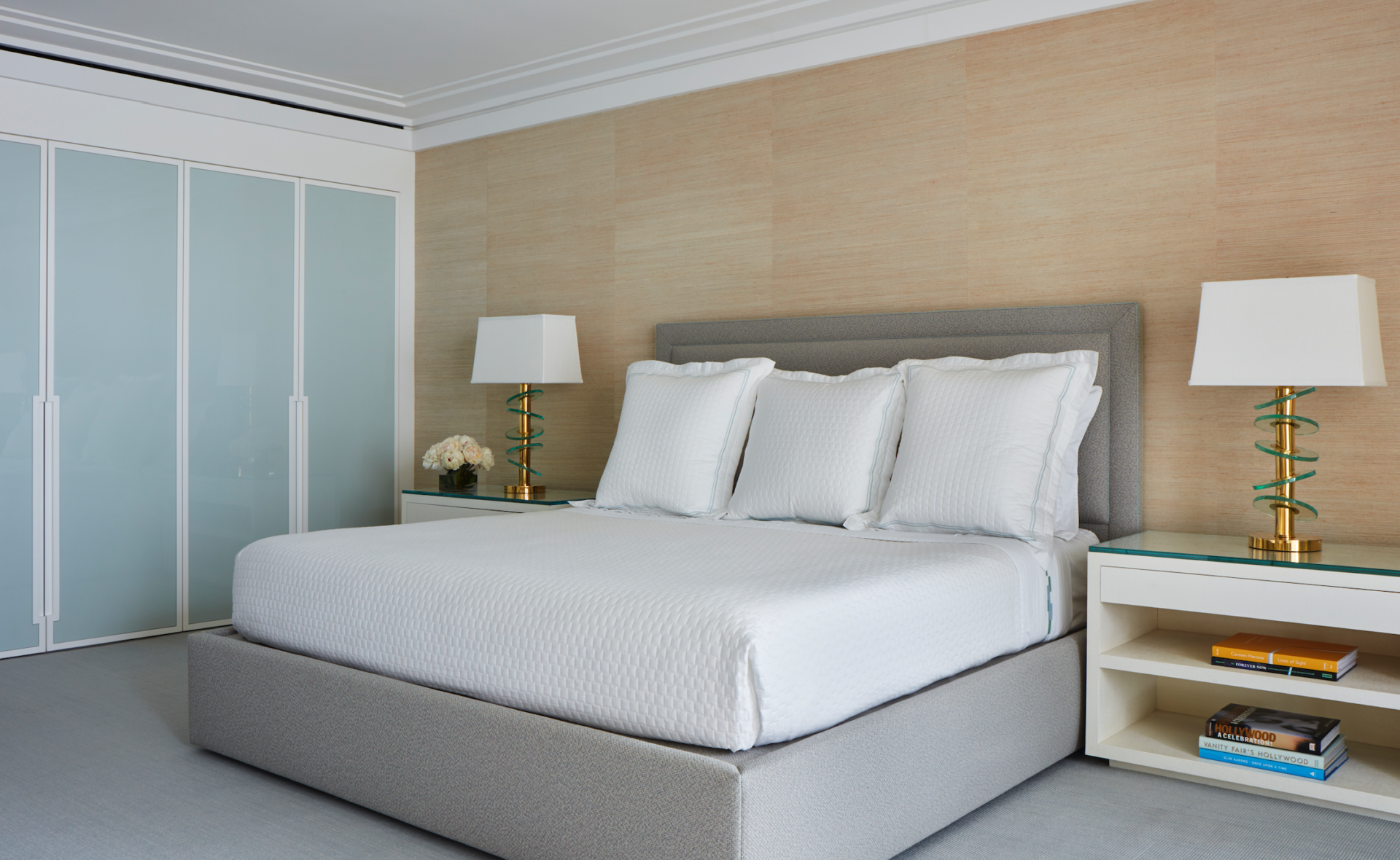