Just north of Kona, on the dry, leeward side of the Big Island of Hawaii, one can drive for miles on the main highway that cuts through craggy lava fields and never see a single person. It is this lonely and seemingly uninhabitable landscape, created by the volcanoes that rise in the distance, that sets the scene for a new house architect Shay Zak and designer Barbara Barry designed for a family in the seaside Kukio enclave. “It was important that the materials did not fight the black and gray lava fields, but offer a continuation of the land through the house, emphasizing an indoor-outdoor connection,” Zak says. Barry pulled the colors of the lava and other natural elements further into the interiors. “I fell in love with the bedrock of lava on which the house was built, the undulating mounds of honed brown-black punctuated by tufts of lime-green grass set against the ever-changing blue to pink sky,” she says.

The natural world not only served as inspiration, but was an integral part of the house’s construction. Zak is known for wrapping clusters of pavilions around a central courtyard lined with spongey seashore paspalum grass. Here, that courtyard, flanked by bedroom pavilions on both sides, leads to a lanai, the open great room, then a second, oceanside lanai. Another swath of grass serves as a buffer between the lanai and the infinity pool, which looks out over more lava fields and the ocean beyond. “Our work is about moving along a spatial sequence,” Zak says.

Barry and her longtime associate, Ryan Coultis, also looked beyond their immediate surroundings to inform the design. “We were looking for the sub narrative of the story—something other than just grass cloth or raffia,” Coultis says. “Barbara and I are both from California, and we love studio pottery. We thought we could bring those elements in, and add a tropical cue, but taken from Brazil.” The pair borrowed the essence of Brazilian masters like Sergio Rodrigues for pieces such as the dining chairs. Holding one of the most prominent places in the house, on the main axis, they help set the tone for all the furnishings, nearly every piece of which was custom designed by the team. (The Ceremony dining table is among Barry’s designs for Baker; a more diminutive version will be available through Baker this fall.) Hovering above the dining area is a cloudlike light sculpture by Stephen White, bringing an ethereal quality to the room and tempering the predominance of wood. The fixture complements the Alaskan yellow cedar ceiling, which resembles an inverted Aztec pyramid but has its roots on the island. “Midcentury Hawaiian modernist Vladimir Ossipoff provided the inspiration for the ceiling design,” Zak says. “His Davies Memorial Chapel at Hawaiian Preparatory Academy uses an overlapping board detail that is active yet simple, and expresses a nice play between light and shadow.” 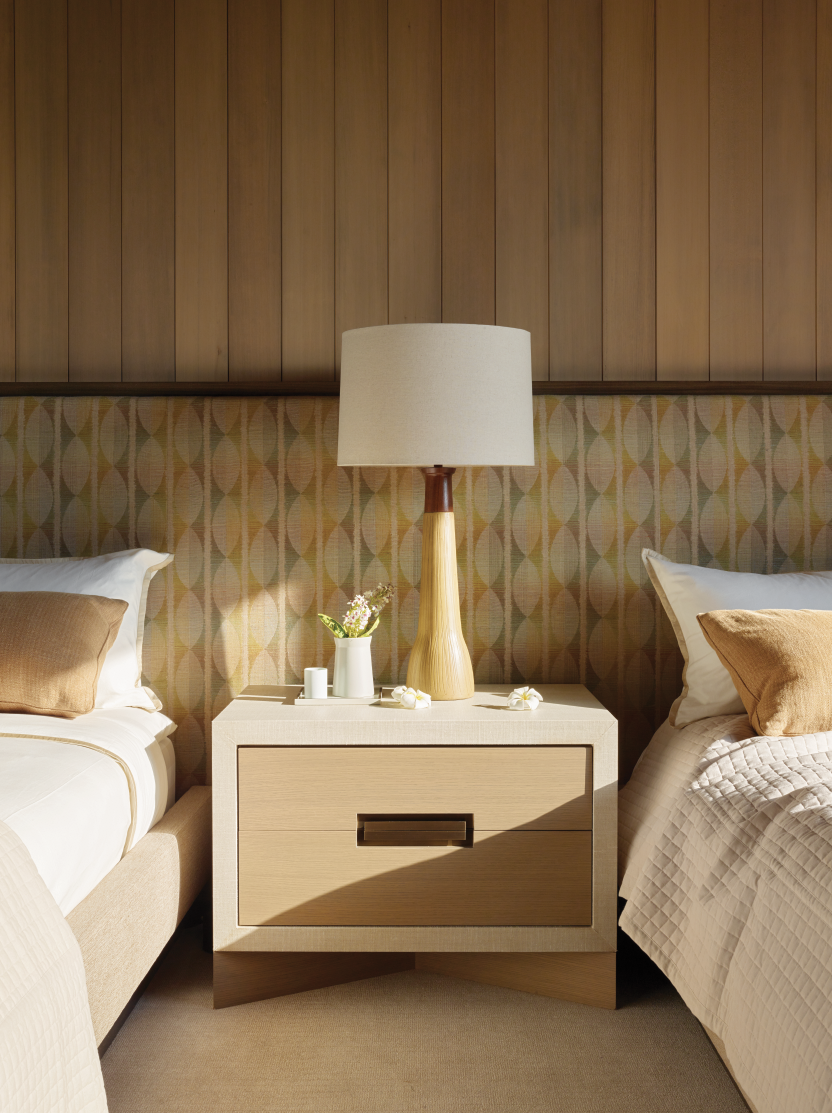 That ceiling treatment prompted the design of the sublime custom desk Barry and Coultis designed for the office, which includes a deep recess that holds a custom bench covered in Holly Hunt leather. Like so many other furnishings, the desk was custom designed for the space—anything else would have been too long or too short. “Scale is everything,” Coultis notes. At the couple’s request, the office joins the master bedroom in enjoying the most prominent positions in the floor plan: situated on either side of the main room facing out to the ocean, with their own private lanais.

Among the few accessories in the office is a unique pair of vintage midcentury ceramic lamps by Gordon and Jane Martz, part of a collection gathered by the designers for the couple over the course of the project. Different Martz lamps dot the bedrooms, whose design schemes Barry calls “variations on a theme,” where they join custom pieces and augment one of the designer’s most innovative moves: an extended headboard covered in different fabrics by Kerry Joyce covering almost the length of one wall. It is a level of customization that allows an incredibly complicated design to appear effortless in a dauntingly beautiful setting. “What we love to do is complex simplicity,” Barry says. “There is a muscular quality to the architecture and to the Hawaiian landscape, and it is our job to balance that quality in scale and in tonality. We also love to create a quiet and calm backdrop on which a robust family life can unfold.” Barbara Barry, barbarabarry.com; Zak Architecture, zakarchitecture.com 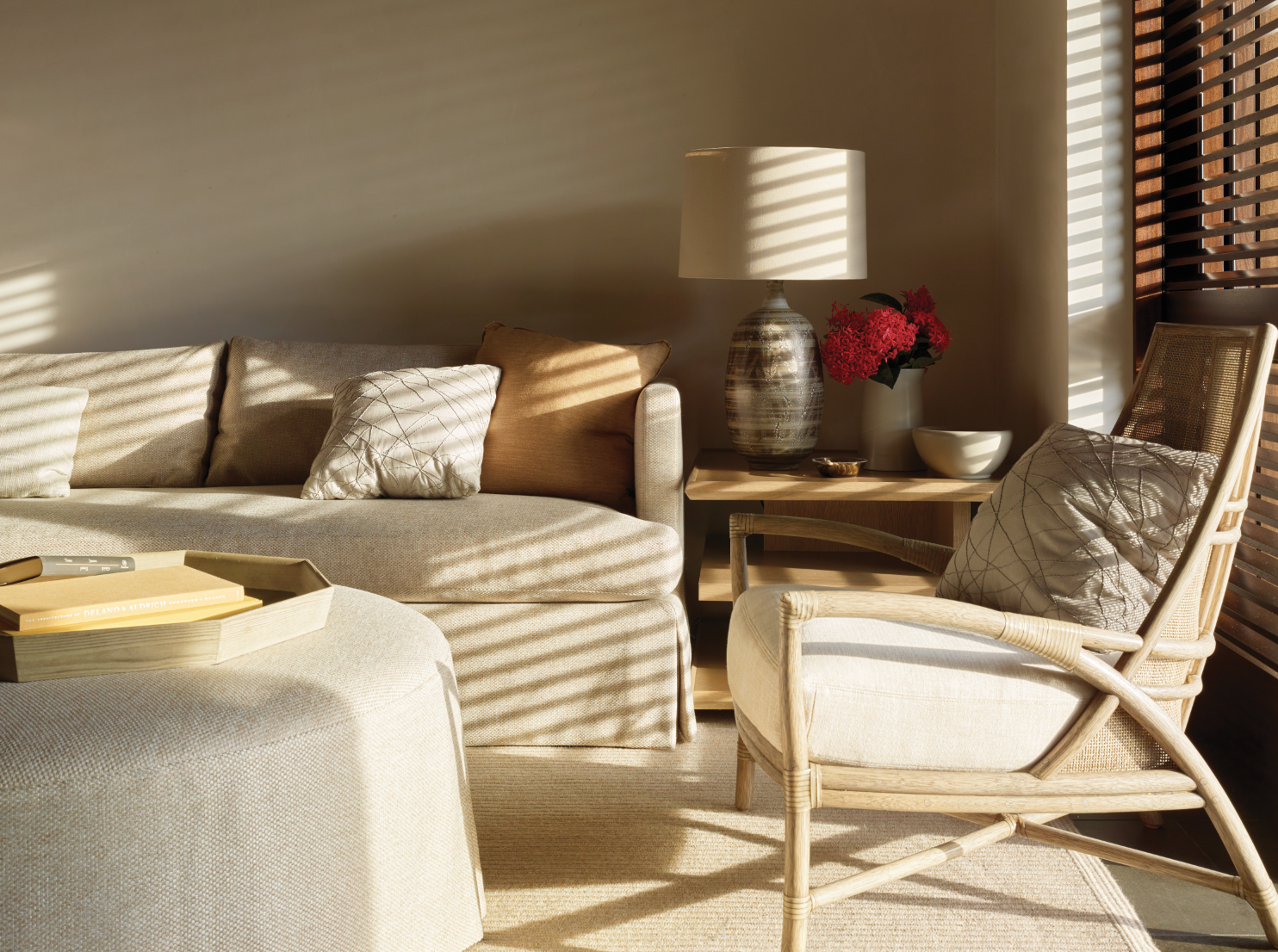 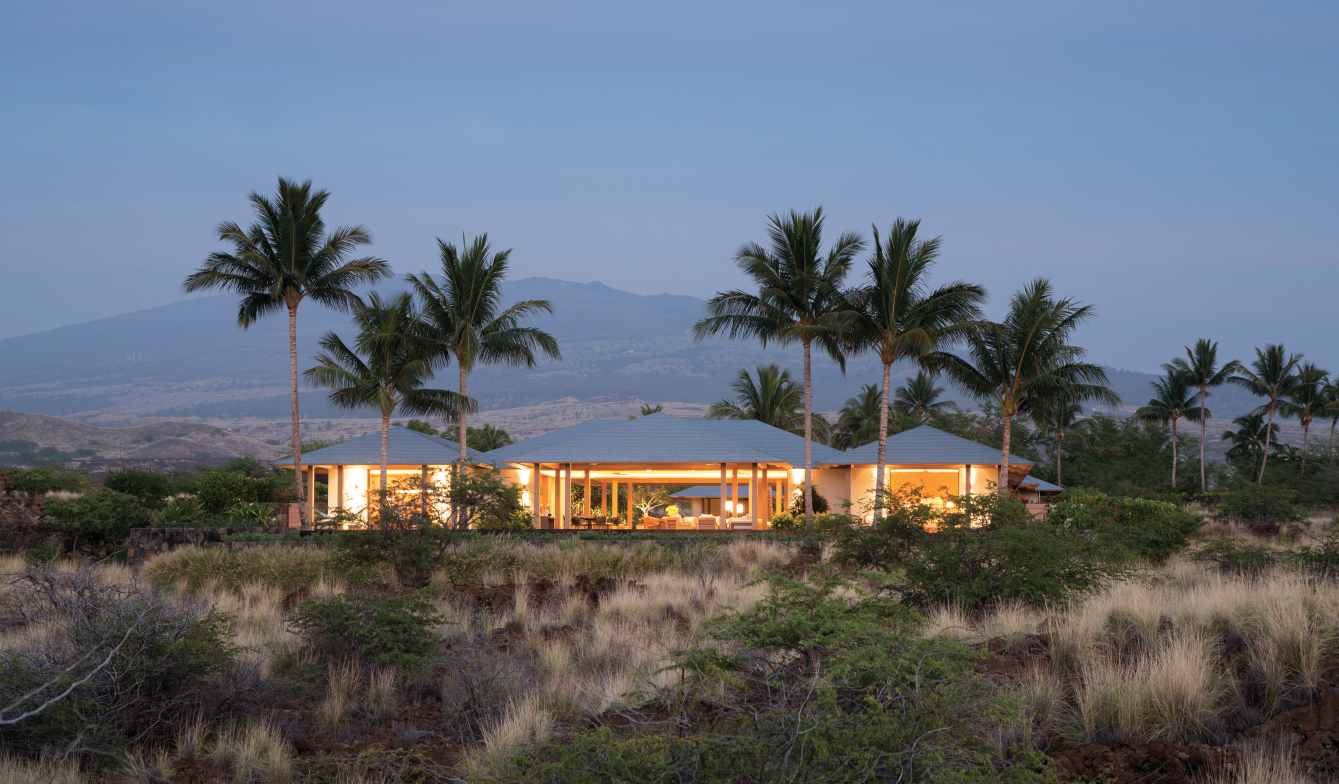