In the quiet enclave of Springs, New York, the home of Pietro Nivola and Katherine Stahl paints a picture of the way the Hamptons used to be. It’s easy to imagine the 1754 cottage as it once was, a hub for midcentury collaboration between the artists who frequented the area, despite a few modern updates—including the fact that the structure now sits 100 feet from where it was built.

Long before becoming a summer haven for the rich, famous and shameless, the Hamptons were a strand of scenic beach towns dotting the Long Island coast, famous most of all for the uncannily beautiful light that drew painters from Thomas Moran and Fairfield Porter to the postwar Abstract Expressionists. The Nivola place is not far from the house where Jackson Pollock and Lee Krasner developed their personal versions of abstraction. Pollock was just one of many artists who used to visit Pietro’s parents, Sardinian sculptor Costantino Nivola and German-born jewelry designer Ruth Guggenheim. Costantino, best known for the sand-cast concrete bas reliefs he created for clients including Olivetti and Yale University, bought the house in 1948, and it soon became a destination for collaboration between this creative cadre—something that’s reflected in every inch of the house to this day.

“Works of art often substituted for furniture in artist’s houses,” Pietro recalls of those early years in Springs. “People had not become rich and famous, and the furniture was what we found here for the most part. Everything from chests of drawers to chairs and tables were items that were left behind. My father also made some furniture on his own, but the works of art were what really brought life to the house, rather than furnishings or things you’d buy in the store.”

From the outside, it’s an unassuming farmhouse, not very large, and clad in the wood shingles so emblematic of the area. But inside, the white-walled space is a testament to the family’s multigenerational dedication to expression. Costantino’s rough-hewn sculptures fill the main house, the nearby barn, a studio and even the yard—where long, sand-cast concrete walls with designs etched directly into the still-wet material are arranged to form outdoor “rooms.” (His isn’t the only work by a family member that ornaments the place; daughter Claire painted a blue Grecian scene on a bedroom wall of a small outbuilding.) Amid so much visual interest, it’s a bold, highly unusual two-wall mural painted during a whirl-wind weekend in 1950 by midcentury architect and designer Le Corbusier that stops visitors in their tracks.

Le Corbusier, who was working on the UN Building in New York at the time and often visited the Nivolas, most likely painted the exuberant piece using materials he found lying around: acrylic and oils and even house paint. “We were surrounded by artists and they often traded gifts with one another,” Pietro says. “Works of art were central elements in the environment.”

Like so many historic homes, this one-time saltbox was subject to a number of piecemeal alterations over the years, from the addition of the second floor and central stairway in the 1800s to a rickety kitchen tacked on in the 1920s. “There’s a lot of interest [in preservation] around here, but it’s an uphill battle. These old places have their quirks,” Pietro says as Katherine agrees with a knowing chuckle. “It’s charming and everything, but it can also be uncomfortable depending on what your aspirations are.” When flooding became an increasing threat to the structure—one storm left three feet of standing water in the basement for two months—Pietro and Katherine were left to choose whether they should start anew or try to save the house for their children and grandchildren. 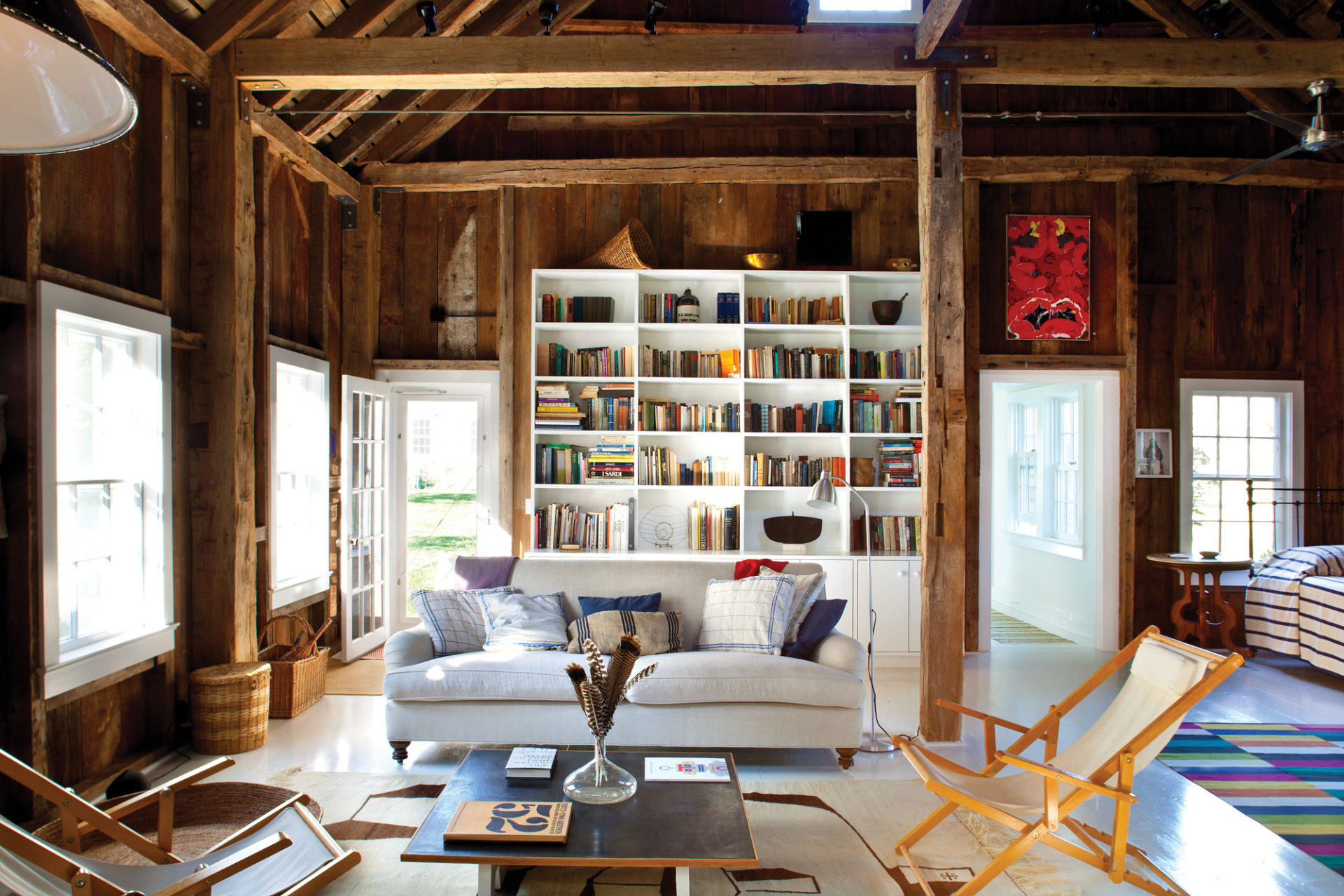 Committing to preservation was only the beginning of the challenges they faced. Costantino himself had considered moving the house back from the road, but it proved technologically impossible at the time. Thankfully, the next generation of Nivolas found a solution in a team of experts led by local contractor Tim Mott and house mover Guy Davis, who devised a plan to use a hydraulic lift to pick up the house and roll it 100 feet back, where it would be placed on a proper foundation.

“The sills were basically sitting on huge boulders—that’s how these old farmhouses were—and much of that had rotted out,” Pietro says. As Katherine bluntly puts it: “The sills looked like Swiss cheese.” It took careful planning to strip the house to its original wide pine floorboards and hand-hewn beams and secure it for the move, and now the house sits eight feet higher and more in harmony with the landscape designed for Costantino by architect Bernard Rudofsky.

Since preserving Le Corbusier’s mural was a key goal of the move, conservator Catherine Myers played an important role from the beginning. “She was the kingpin for all of us,” Katherine recalls. “She held a short course for the framers and the mover; she told them exactly what she would be doing to it, and how they would be working around it.” While the team considered trying to remove the mural from the wall for transport, Myers believed keeping it attached would be the safest route. She devised a muslin-backed framing system that would keep the pieces in place should the plaster crack. Once the mural was settled in its new location, Myers injected grout through tiny holes in its surface to reinforce its connection to the wall, a standard conservation practice.

While the artwork survived the move, some additions, like the 1920s kitchen and porches, were too fragile and had to be left behind. Pietro used it as an opportunity to rethink some of the layout’s more outdated elements. Enlisting Sag Harbor architect James Laspesa to help with the drawings, Pietro devised a new plan inspired by a lifetime of connection with the space—“It’s in my DNA,” he says—incorporating updates for comfort (central air and new bathrooms) and sustainability (replacing the original hand-blown glass with double-paned Marvin windows designed to mimic the originals, which found a new home in the barn). Rather than re-create the old kitchen “like a Hollywood set,” his scheme offset the space and opened it up with an eight-foot aperture that now offers views of the Le Corbusier mural. Before, Katherine recalls, “We lived in the kitchen—and we never saw the mural.”

“In a way, we took the house a little further back to its original scale, its original form,” Pietro says. Though he is quick to brush off credit for the design, which he says came to him one weekend, it’s undeniable that Pietro’s personal connection to the space is responsible for its latest incarnation. Though he studied urban planning and design, “that’s not where this came from,” he explains. “It came from having been around my father’s friends, many of whom were architects. My father himself worked with architects on a major scale. I learned more from him and his friends than I did from other sources.” 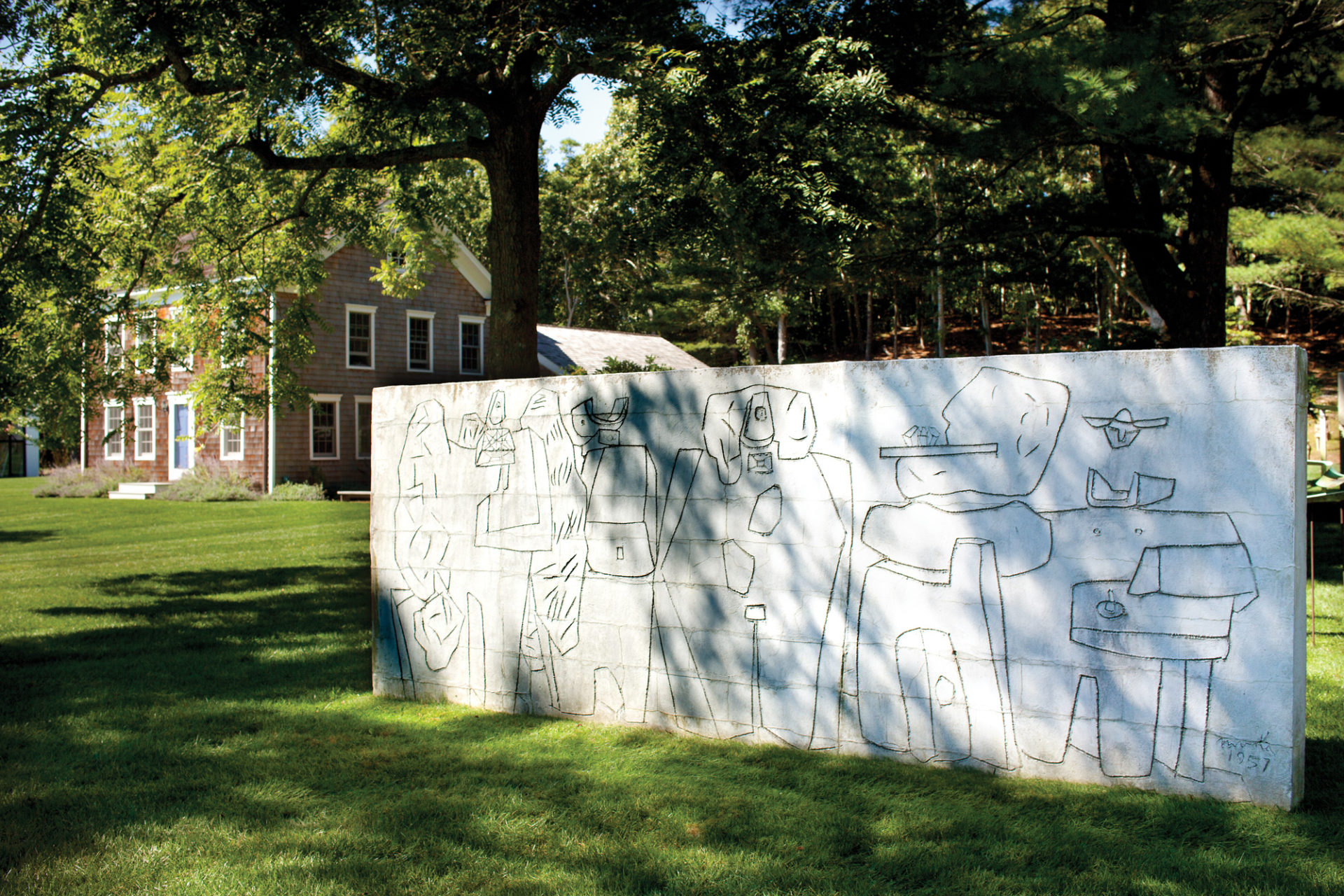 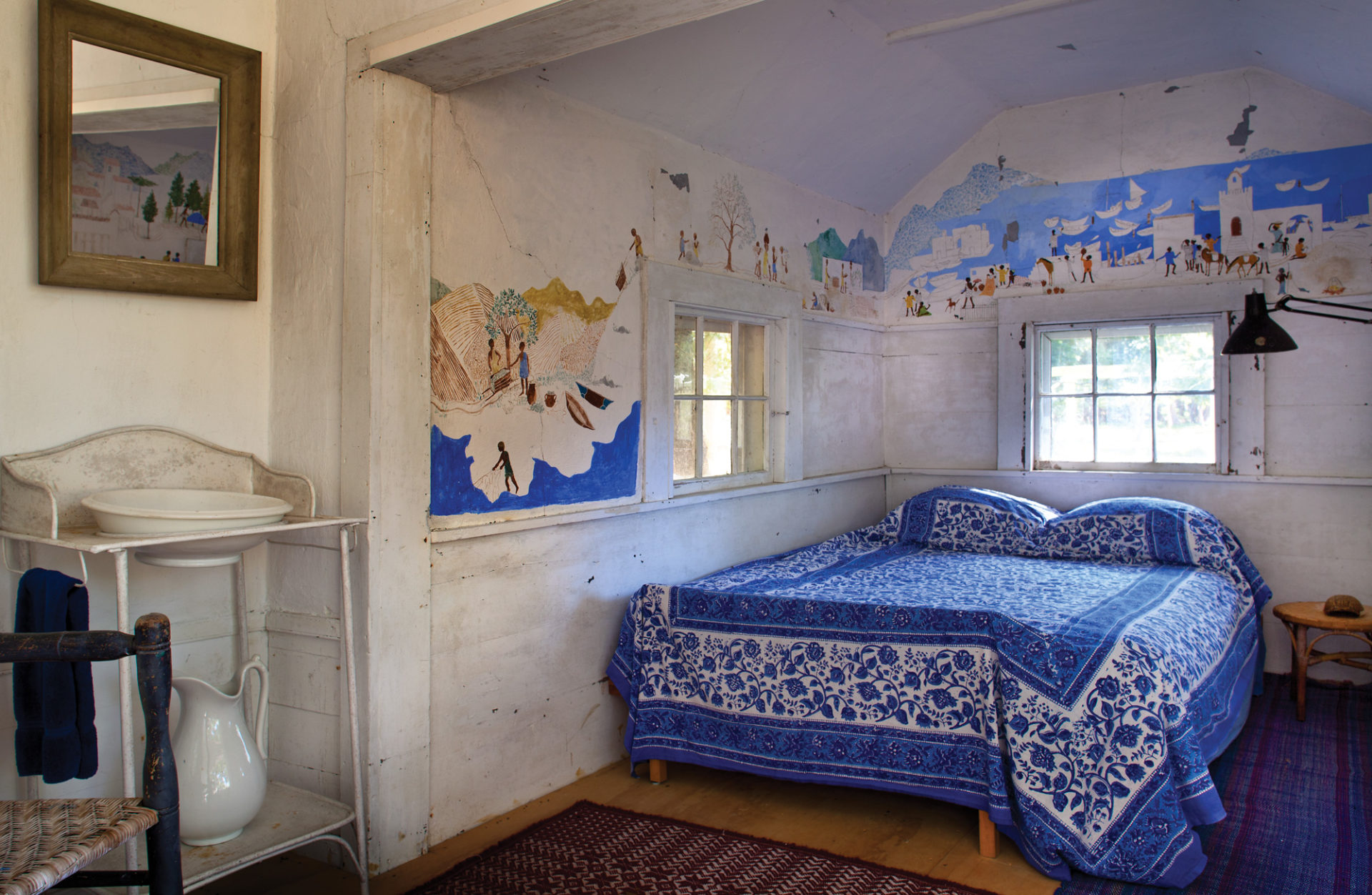