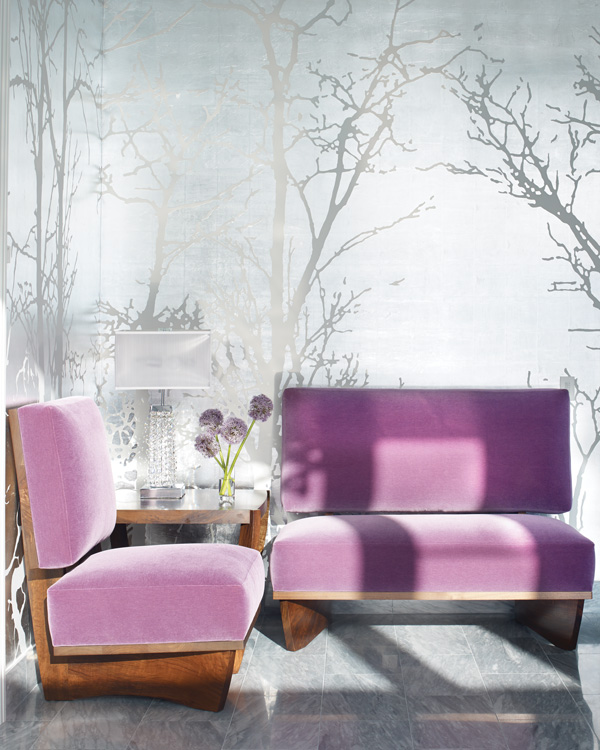 When he was developing the concept for the Usonian house—his vision of the organically designed, meticulously crafted home made affordable for the middle class—Frank Lloyd Wright distilled his aesthetic imperative into a memorable and oft-quoted exclamation: “Out of the ground, and into the light!” The basic idea, characteristically Wrightian, was to suggest that the built structure had emerged naturally from the soil, and was as much an outgrowth of the surrounding landscape as any rock formation or copse of trees.

Wright and his Usonian vision were both very much on the mind of the modern-day architect Gordon Kahn for a house commissioned for clients in the rural enclave of Washington, Connecticut, located about 80 miles north of New York City. “Even though the interior aesthetic isn’t similar, in any way, to a Frank Lloyd Wright house, the concept isn’t dissimilar,” he says. Like a Usonian abode, the house Kahn built was “designed to marry to the site, and to be built of indigenous materials or materials that were familiar to the site.” Beyond that, he adds, it was intended “to create a sense, from the interior, of openness to the outdoors, while at the same time affording a strong sense of shelter.”

Kahn was introduced to the clients, a husband and wife, in 2011. Even before meeting face-to-face with the wife, Tanja Aalto, he sensed that she was someone who understood that she had a unique home site on her hands—and who knew what to do with it. “We had talked on the phone a lot about the desire to create indoor-outdoor ambiguity, because the site is so beautiful,” he says. “She did some basic sketches of how she saw the house connecting to the land, and upon meeting her at the site I immediately understood what her intent was, even though at that point it wasn’t necessarily fine-tuned.”

Their discussions began to take on the air of a brief; soon the brief had been converted into a blueprint. But first there was the matter of what to do with the existing home on the lot. Though it had been too small for the clients, and represented way too much of a stylistic mismatch, “there was some elegant site work in place,” Kahn says. “Retaining walls, an exterior staircase, the driveway, the approach—all of these were really solid, and quite beautiful.” These successful exterior elements would be kept intact or only minimally modified, it was decided. But to match the clients’ and the architect’s vision, the existing house would need to come down—and a new one would need to be built from the ground up.

When she and her husband were in the market for a new home, says Aalto, “we quickly discovered that we shared a dislike for the traditional Connecticut-style house, and that we shared a like for high ceilings and open spaces. But while we both wanted high ceilings, we also wanted our house to feel cozy”—two desires that aren’t easily reconciled. 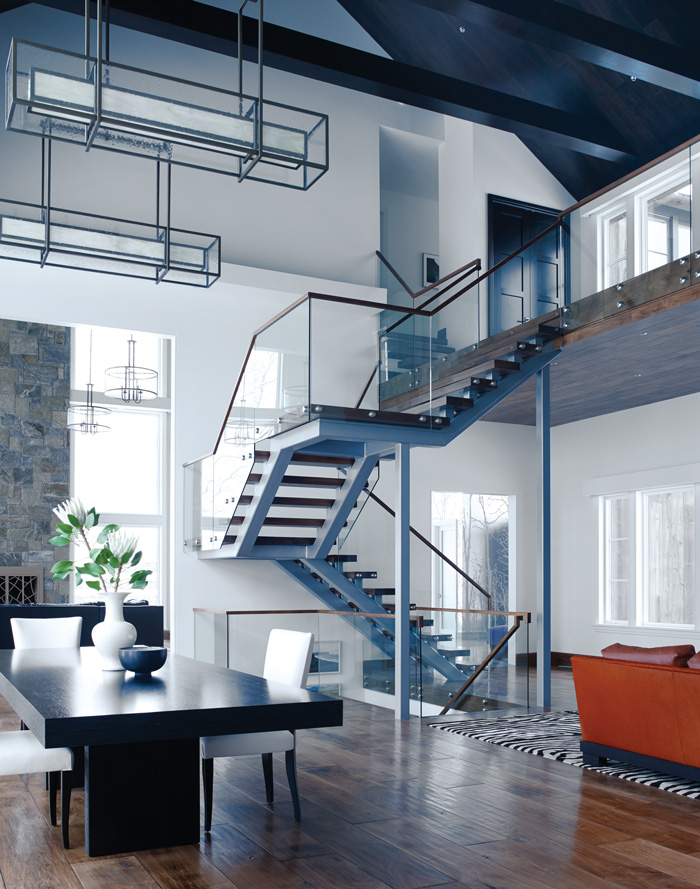 And yet, reconciled they were. In the great room, a massive open space that comprises both living and dining areas, three tiers of Marvin windows have been stacked like layers on an ethereal, 20-foot wedding cake to ensure airiness and openness. At the same time, the dark oak panels of the ceiling conspire with the wood flooring to ground this formidable volume in the material world, and keep it from floating away. Geometric custom lighting, from Hammerton, hovers above furnishings from Berman Rosetti, whose modernist lines have been tempered by the warm, rich tones of their upholstery. An angular Kahn-designed staircase charges through the room like a frozen lightning bolt, providing, in the architect’s words, “a vertical sculptural element within the space.”

Just off the great room’s dining area—where a towering wall of windows turns the act of dining at the table and custom chairs, both from J. Robert Scott, into a delightfully al fresco affair no matter the season or the weather—a Snaidero kitchen is paired with Sub-Zero appliances. Throughout the house, carpets from Ralo Tibetan Rugs provide periodic jolts of visual electricity, cheekily making the case for bright color and bold pattern amid all the white paint, translucent glass, dark wood and earthy stonework.

The goal was to achieve “an interplay of solid and void, while still maintaining a strong sense of shelter,” says Kahn of this house where contrast is played up rather than played down. All of the thoughtfully designed rooms in this house would likely have elicited a nod of approval from Frank Lloyd Wright, but one room in particular seems like it would have made him smile. For the meditative entrance hall, Aalto commissioned local artist Matt Wood to take photographs of the trees surrounding the house—in wintertime, and thus stripped of their leaves. The images were blown up and reproduced in silver leaf to make for a unique arboreal wall pattern that is at once familiar and mysterious, natural and otherworldly. “Our original plan was to have an art wall in that room,” says Aalto. “But it just wasn’t working out—neither structurally nor materially. So I thought: Why don’t we just make the whole room be art?”

That spirit of architectural holism—indeed, why not make the whole house be art?—is one that has happily been passed down from the Arts and Crafts movement of the 19th century, through Frank Lloyd Wright and the Bauhaus in the 20th century, and all the way down to top residential architects, like Gordon Kahn, in our current century. And that same spirit is alive and well in this house that appears to have taken spectacular root in the western Connecticut soul. Out of the ground, and into the light.   Gordon Kahn Associates, gkassociates.com 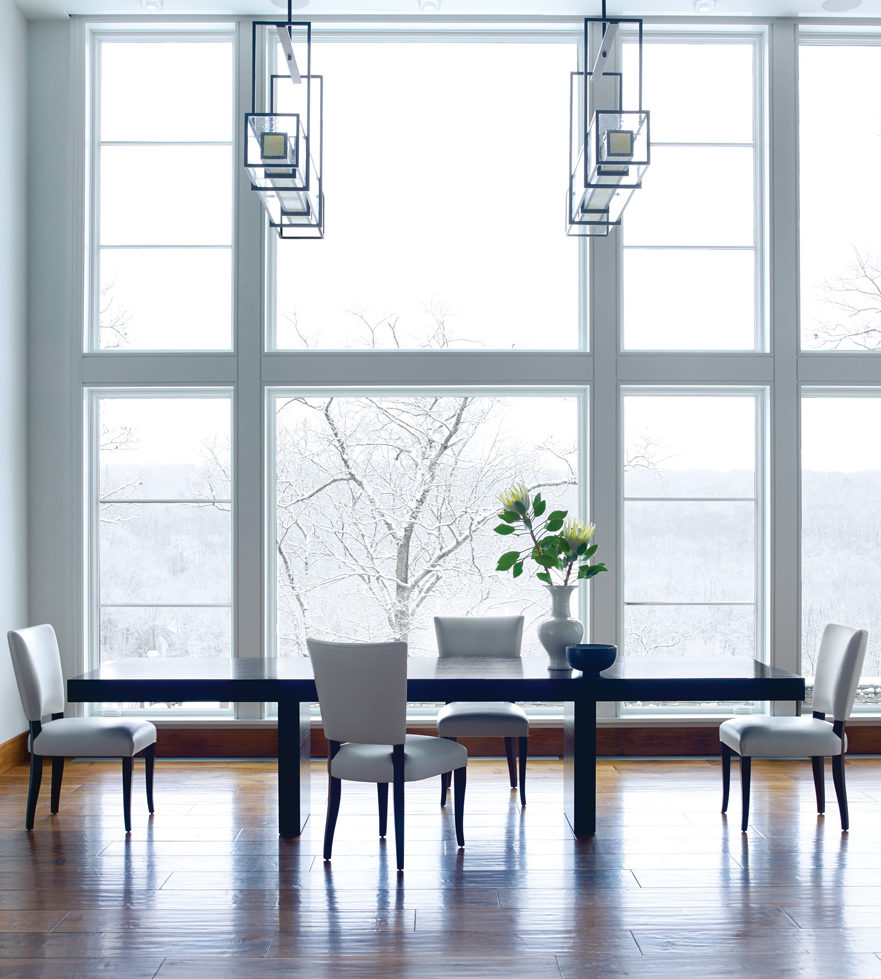 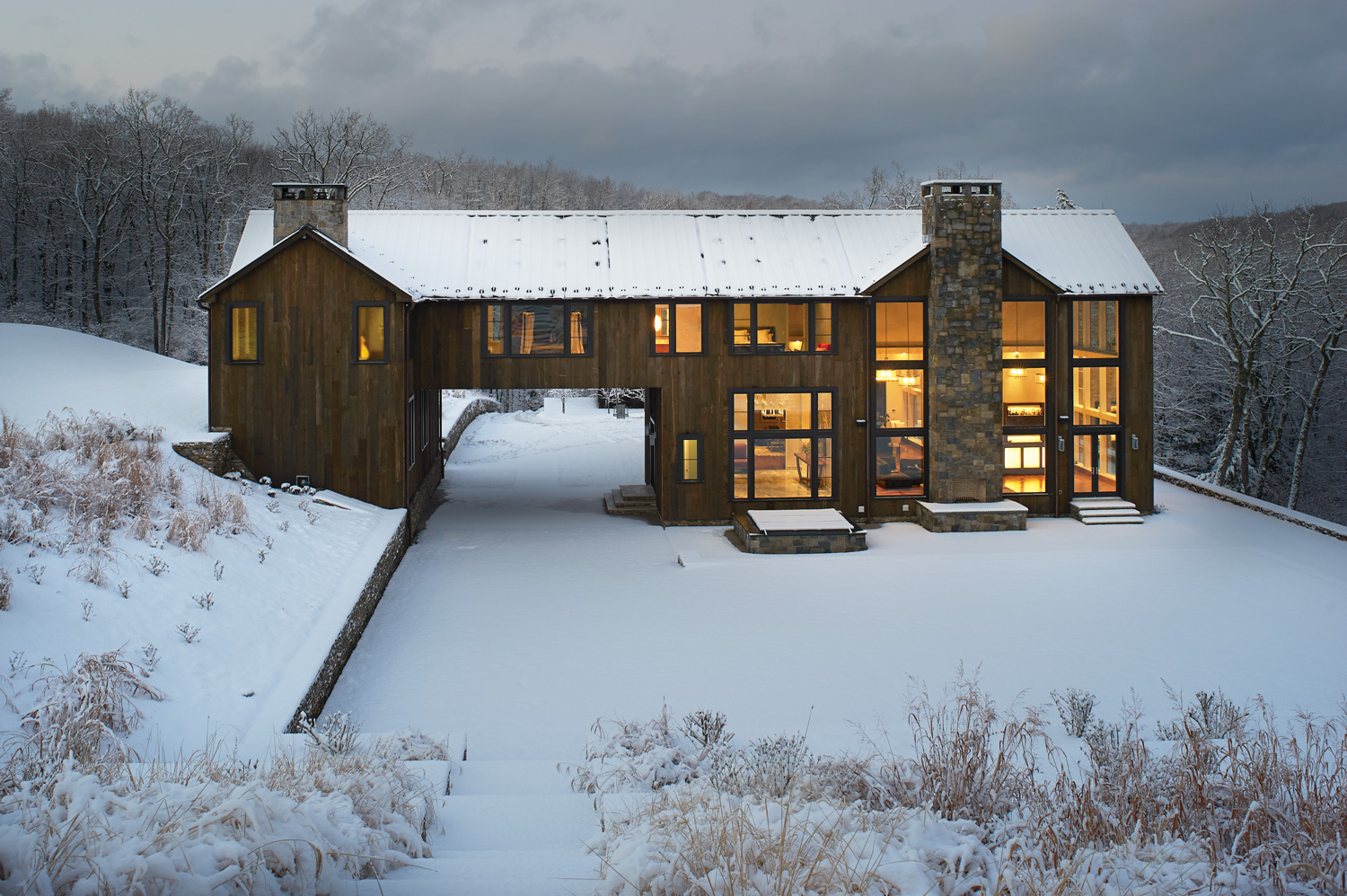